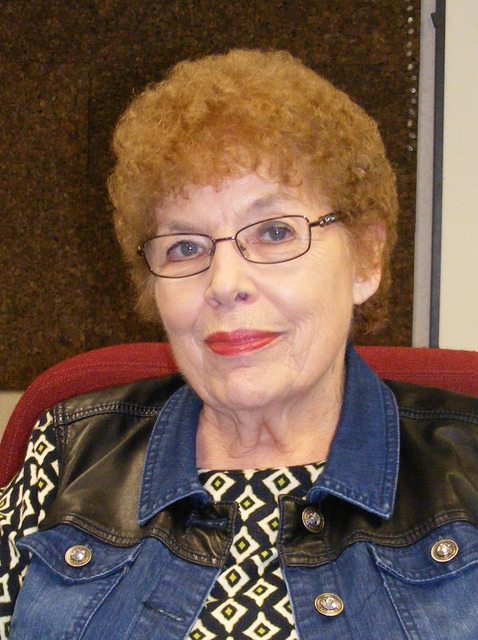 Yes, Joan Klein, retired educator and lobbyist, is back in Greenville after a year-long stay in Lewisville, Texas, near Dallas, where she recuperated in a therapeutic facility following an injury she sustained May 21, 2015, in Miami County.

“I was at a retired teacher’s meeting in Dayton and, after lunch, was trying to figure out which way to go home,” she said. “I decided to go to Troy into Kohl’s and return something. I went in and ran into another teacher who said she heard so much about me. She also warned me of bad weather that was forecast on the news. She told me I had better get out of there and go to Greenville. So, I went to the cashier, who recognized me, and he, too, said I’d better head for Greenville. He said there might be a break in the storm but could have a tornado in Greenville.”

So, she left the store that mid-afternoon.

“I had my walker with me and I slipped and slid on the concrete with corduroy ridges. I went up in the air but didn’t hit the asphalt. I was traumatized but could still think. It seemed like one giant superman picked me up three times and rolled me around in the storm. I had a broken arm and was screaming 9-1-1.”

Emergency responders, who reportedly couldn’t get the fallen woman up, did get her on a gurney.

Klein, who was born and raised in Lima, recalled there was “flooding galore,” and said she was taken to Upper Valley Medical Center.

“The nurses were wonderful, but they couldn’t get hold of any doctors,” she recalled. “I was in excruciating pain screaming constantly. “

Subsequently, three doctors came in and there were lots of X-rays.

“I had broken my arm up into my shoulder and they said it was the worst kind of break you can get,” Klein recalled. “The doctor said he didn’t know what to do with me.”

Apparently, she was told to get her walker and she would be dismissed, but having no family in the area or no way to get back, she asked if the hospital couldn’t transfer her to Greenville. She said it was against hospital policy, but they offered to get a taxi to take her to Kohl’s and pick up her car and drive home.

“I couldn’t even do that, And my walker flew away in that storm and I never found it,” said Klein, who by this time had her arm in a sling.

The next morning, arrangements were made for her return to Greenville via ambulette. Once she got to Greenville, Klein asked the driver to take her to the Brethren Retirement Community, and she did.

“They put me in a room but I couldn’t get a doctor there either,” she said. “One nurse said she would get me a doctor. The next morning Dr. Menendez came in with my son behind him. Rob [her son] said, ‘I’m taking you to Texas and we’re leaving in two hours.’ I was too weak but we went.”

Still in pain, she said an announcement was made on the plane that it would not be going quite as high or as fast because of a medical emergency patient on board. Klein didn’t know they meant her until Rob told her about it.

“They took me to an orthopedic hospital in Texas,” she said. “I had two different options for this unusual break. We can do surgery or try to avoid surgery with therapy.”

She never had to have surgery.

“They couldn’t believe the progress I made but I was determined,” she said. “If I wanted to get back to Greenville I was going to have to be strong.”

While in the rehab facility, she put to good use what she did here at home….got things going.

“I felt sorry for the people there,” she said. “I’d asked them to watch DVDs. There was a movie theater across from my room. I asked them if I made arrangements would they come to watch movies. I got a committee going and told them how to advertise with posters that I made with bright-colored markers. Usually we showed the movies twice a week and it went from two people to probably 20-some.”

She said by helping them out it made her pain subside as well as made them happy.

“I was a cheerleader once upon a time,” she said. “The director patted me on the back so many times. I was crying when I left there, but I wanted to come home.”

After her discharge on May 25 this year and her continuous pleading with Rob to take her home, he finally made the arrangements.

“I felt guilty leaving but I knew I had to,” she said. “I had a sister and an bother with cancer, and I wanted to see them.”

She visited all of her siblings when she returned to Ohio.

Then, husband Don who died Sept. 9, 2008, was transferred to Greenville to work as a mechanical engineer at Fram Corp and they made the move.

“I wasn’t going to teach because I had two babies,” Klein said. “Then, one day a knock came at the door. There stood a man who from South Lima High School where I taught.”

It was Ed Gruber of Greenville, who learned of Klein’s move to Greenville. He wanted her to talk to the superintendent of Greenville City Schools. So, she did, and the administrator told her, “Ed said we have to hire you right away.”

With two little ones at home, she told him she would work as a substitute first.

“I caved in,” she said. “I subbed at different schools and enjoyed it and eventually went back to teach full-time. I was in every elementary school and even junior high.”

“I got my master’s degree and they switched me to the Title I reading program,” she said. “I went to Wright State. I did it to help all children with reading skills.”

She was a reading specialist in a room at Woodland and then East, teaching children in grades 1-4.

Klein was involved with the Western Ohio Education Association, serving as a representative.

“I was always running for things,” she said. “I am very politically oriented and was on committees and legislative commissions. I am a Democrat. It was a real exciting career for me. It was not boring.”

As a lobbyist, she said she would lobby for all kinds of issues, including education, school funding or women’s rights.

The last time she lobbied was two years ago and she wants to get back into it.

“I feel that needs are so great,” Klein said. “Active teachers can’t or don’t want to do it. I got my determination from my mother. I had a very active career with lobbying, which is all volunteer. To me, it’s an exciting world. I’m up there in front of thousands of delegates.”

Klein, who got back home about two week sago, said she has to take it a slow for a bit so as not to fall and again and re-break her arm/shoulder.

“I need other things to do,” said Klein, who has an interest in genealogy and attends Garst Museum programs. “I am on the board of the League of Women Voters and I try to get more involved in Democratic functions.”

She is also meeting with other retired teachers at East School and Woodland Heights once a month.

Klein, a graduate of Elida High School, said she retired in 1966.

In addition to son Rob, Klein has a daughter, Jodi Gifford of Orlando Florida, who works for Wells Fargo. There are also three grandchildren and three great-grandchildren.