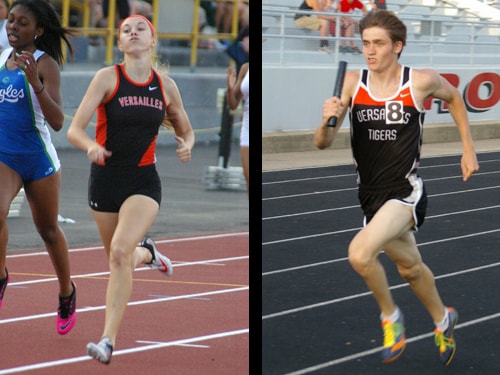 DARKE COUNTY – Two Versailles athletes who qualified for state in multiple events are this week’s Daily Advocate athletes of the week.

Ware qualified for state individually in the 800 meter run and as part of Versailles’ 4×800 meter relay team.

“He’s had a stellar season,” Versailles track and field coach Mike Goubeaux said. “For four years he’s been a real staple to our program. Now it’s his turn to shine.”

The senior won the Midwest Athletic Conference, district and regional championship in the 800 meters.

“He’s had a lot of desire to be both a team player and to move on as an individual, and he’s accomplished all his goals that he set forth for the season,” Goubeaux said.

Ware was a vital part of the Tigers’ relay teams this year and was the anchor of the state-qualifying 4×800 squad.

“He’s been a rock solid anchor of our relays this year,” Goubeaux said.

After making state in three relays last year, the sophomore made state individually in the 400 meter run and as part of the 4×200 and 4×400 meter relays.

Among Watren’s accomplishments this season were district and MAC championships in the 400 meter run.

“It’s a good learning experience her freshman year, and she used that experience last year and all those state experiences to know what it takes to get here as an individual,” Goubeaux said. “And I think that’s been her biggest accomplishment. We felt solid about our relays getting back here, but the 400 dash is a tough race in our region; it’s one of the toughest. For her to qualify in that event, it speaks volumes about her talent.