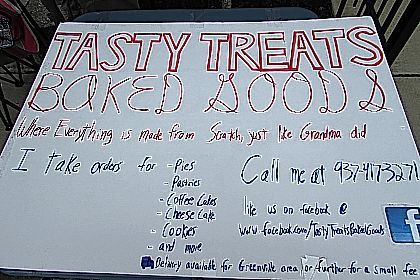 GREENVILLE — “If you make it, bake it or grow it,” the Greenville Farmer’s Market is the place to bring it, says Amber Garrett, executive director of Main Street Greenville.

The market is open from 9 a.m. to 1 p.m. every Saturday from June 6 to Oct. 10, with the exception of the Fourth of July this year. Booth space surrounds the courthouse at Fourth and Broadway.

Barrett said the market is continuing to grow, with 30 vendors signed up so far this year — 11 more than at the same time last year.

Most of the market booths feature craft items and baked goods now, but Barrett said the end of June brings more produce as local gardens begin to bring forth their bounty.

On Father’s Day weekend, some of the vendors stayed home with the threat of rain on the horizon, but the market stays open rain or shine, so this weekend was no exception.

Visitors should come early for the best selection, and items vary from week to week, so they should come often, too. Loyalty is rewarded with the Market Pass that awards a free gift to market shoppers who spend $25 or more in a month.

Jill Etzler, who started knitting in high school, brings her knitted, embroidered and crocheted goods to the market every weekend. This is her first year at the market, and she said it’s been a pretty good venue for her.

Alyssa Minter from Miller Flowers said she has been at the market for two or three years now. She used to just bring mums in the fall, but she’s branched out this year with herbs, microgreens, soaps and flower arrangements, as well as other fresh surprises.

Lindsay Borgerding was manning the Hometown Hemp table this Saturday. It’s her third year at the market selling a wide variety of handcrafted jewelry items.

For the sweetest of treats (and sample tastes available), Susan Magoteaux’s Oh Fudge! booth is a can’t-miss. Magoteaux is in her second year of the market, and although hot weekends sometimes prove a challenge, she brings along coolers to keep her candies fresh long enough for her patrons to gobble them up.

Linda Emerick is a jewelry maker in her third year at the market, offering a variety of sparkly baubles that look anything but homemade. Her sister Deanna Henninger comes along to help with customers and keep her sister company.

It’s the second year at the market for G&M Produce, which was down to just a head of lettuce by the time afternoon rolled around Saturday. Mark Burns said the rest of the goods he brought were snatched up quickly, and the booth will be overflowing with fresh produce as the gardens begin to come in.

The Saenz family is in its first year at the market with a variety of hand-made wreaths, bags and craft items. Mom Susanna Saenz said the whole family helps make the products sold at the booth, which was being manned by her, along with Yocelin, Stephanie and Valary Saenz on Saturday.

“We like to spend time together and make crafts,” Susanna said.

Karen Homan also looks at the market as a way to spend time with her family. The purveyor of baked goods said her daughter lives nearby, so she signed up at the market to sell her goods and have an excuse to visit her daughter and grandchildren.

Valerie Randolph has her own rock pile at the market, with an array of handpainted rocks suitable for a shelf or a garden — and the bunnies at her booth won’t eat the garden. She noted that the rocks should not be placed directly on the dirt, as they will draw moisture from the soil and spoil the paint, but they can be placed on another rock or a brick and weather well in the outdoors.

The Tasty Treats booth features just what it says — baked goods made by Clinton Garber, who is in his first year at the market. He does all his own baking, and he takes requests.

That’s just a “taste” of the bounty available at the market, and vendors are always welcome to have their own booth or participate in the communal booth. For information, visit www.DowntownGreenville.org.

The Greenville Farmers Market is sponsored by the Greenville National Bank and KitchenAid Experience Retail Center.

For all the latest each week at the market, follow the Downtown Greenville Farmers Market on Facebook.