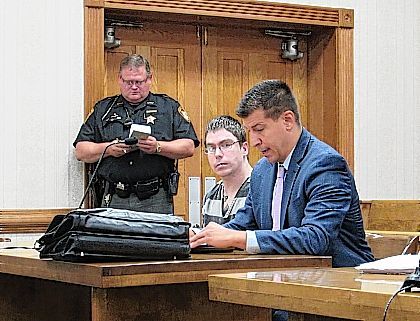 GREENVILLE — A Bradford man told the judge, “I want to get help,” before pleading guilty in Darke County Common Pleas Court Tuesday morning to charges related to exchanging sexual dialogue and images with underage girls on the Internet.

Quigley noted that Reineke was under post-release control for a previous conviction when a Greenville mother brought to the police photos sent to her 10-year-old daughter. Three of the charges involved a 13-year-old girl who lives in Wisconsin, Quigley said, whom Reineke convinced to send him photographs.

Bucio said that he felt bad for his client, who was diagnosed with Tourette Syndrome at 7 years old, making developing healthy relationships difficult for him.

Bucio also said that some of his client’s behavior was “instigated by the juveniles,” including the 10-year-old Greenville girl who Bucio claimed conspired with her friends to “play a prank on him” and convince him to send photos.

“He has told me and his family that he really and sincerely wants to get better,” Bucio told the court.

Reineke told the judge that he also has been diagnosed with obsessive compulsive disorder, a form of cerebral palsy and a form of mental retardation.

The defendant told Judge Hein, “I’m sorry for my actions … (I want to) become a better person that I know I can be … seek help.”

Hein told Reineke there are sexual offender education and rehabilitation programs available in some prison environments, noting, “Whether that’s very thorough is a matter of debate,” about the state programs. He stressed to Reineke that what will be more important is support, counseling and treatment after he is released.

In addition to his prison time, with 68 days credit for time served, Reineke will be required to submit to five years of post-release control and register as a Tier II sex offender for 25 years.

Reineke was previously convicted and served time for sexual conduct with a 12-year-old girl and raping a disabled man. Because the more recent offenses occurred while he was on post-release control, he could face additional penalities for the parole violation.