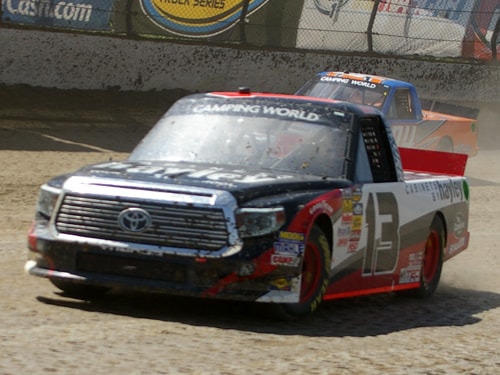 ROSSBURG – Even though they’re some of the best racers in the world, many of the drivers in the Mud Summer Classic came to Eldora Speedway knowing little about how to approach racing on the Darke County track.

As the only modern-day NASCAR race on a dirt track, the Mud Summer Classic presents a new set of challenges for drivers. Many of them, including those near the top of the Camping World Truck Series standings, had never raced on dirt prior to visiting Eldora.

“Just winging it,” said Daniel Hemric, who drives the No. 14 California Clean Power Chevrolet Silverado and entered the Mud Summer Classic ninth in the truck series standings. “The way the testing policy is there’s not a whole lot leniency on the testing so I got to watch a lot of tapes and tried to see how the tracked changed in the years past from practice to the nighttime. That’s all you can go off of. From what everybody’s saying, the track seems to be a little drier this year than most. The good thing about that, never doing it before, is it’s the same to me.”

Other drivers, such as Cameron Hayley of the No. 13 Cabinets by Hayley Toyota Tundra, hopped in other models to test out driving on dirt. Hayley, whose only previous experience on dirt came in a sprint car when he was 11 years old, practiced for 20 to 30 laps in a Modified last weekend.

But Eldora is the first time he’d take to a track to compete in a race on dirt.

“Obviously never being on dirt was a big adjustment for me, but I watched a lot of trucks out there between the two practice sessions,” Hayley, who entered Wednesday seventh in the standings, said after the practice sessions. “Just try to learn as much as I could.”

Ray Black Jr., who drives the No. 07 ScubaLife.com Chevrolet Silverado, also had never raced on dirt prior to coming to Eldora. He drove 180 laps in a Street Stock last weekend to get ready for the Mud Summer Classic.

Black entered Wednesday’s race 11th in the standings and wanted to continue his success, regardless of the type of surface.

“We’ve got a good streak going on, and I’d hate to break it,” he said. “I know it’s dirt and it’s a different animal.”

In addition to the practice sessions, drivers relied on film of the first two Mud Summer Classics plus wisdom from other drivers, crew chiefs and spotters.

Hemric, who is a teammate of 2013 Mud Summer Classic champion Austin Dillon, looked to his fellow NTS Motorsports driver for advice.

“We picked his brain a lot more so before we got here of what to expect, what not to expect, how the track would go through a change from day to night,” Hemric said. “Everything he’s said has been helpful.”

Austin Dillon and his brother, Ty Dillon, both are veterans of dirt racing. Their experience with the special conditions gives them an advantage over the other drivers who are just learning how to approach the dirt track.

“There was quite a big hole off (Turn) 2 that a lot of people were complaining about,” Ty Dillon said after the practice sessions. “But I think the dirt racers, we don’t complain. We’re used to a little bit of a rough track. I was just talking to Brad (Keselowski), and he said, ‘Can you believe that hole?’ And I was like, ‘Yeah, it makes Kentucky feel like nothing, huh.’ You know why we don’t care about it now. But it’s quite a bit different on those guys that have only run asphalt.”

As novices as dirt racers some of the drivers were taking and wait-and-see approach to how they wanted to attack Eldora Speedway.

“I think it depends on the race or the time of the race,” said Hayley, who lives in Sandusky. “I think at the beginning I’m going to stay cautious and just learn a little bit and then definitely in that last segment we’re going to go for broke and see what we’ve got.”

With so much to learn, it’s a learning process on every lap, Hemric said. But being new to the dirt track does have its advantages, he said.

“The good thing about that is there are no expectations so you go into it with an open mind and really having a blast throwing this Camper World trucks around here in the dirt,” Hemric said.