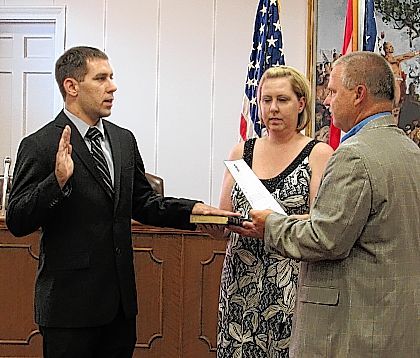 GREENVILLE — The newest patrol officer on the Greenville Police Department was sworn in by Greenville Mayor Mike Bowers Tuesday morning.

Lucas Baker comes to Greenville after having spent the past three years as a part-time officer on the Eaton Police Department.

Baker was raised in Eaton and went to high school there. He earned his Peace Officer’s Certificate from Sinclair’s police academy in May 2012.

Baker still lives with his wife, Stacy, in Eaton, and he said he plans on commuting for the time being.

He will serve as a full-time officer in Greenville.

“I’m very excited to learn the city and work with the citizens,” he said. “I’m looking forward to a long relationship.”

Baker said his great-grandmother, Inez Roll, lived in Greenville before she died, and he used to visit as a child.

He will be spending about a week in training before he takes to an evaluation period, working in the field with a partner. Beyond his trial period, he is expected to be patrolling alone, as is the typical situation for Greenville Police.