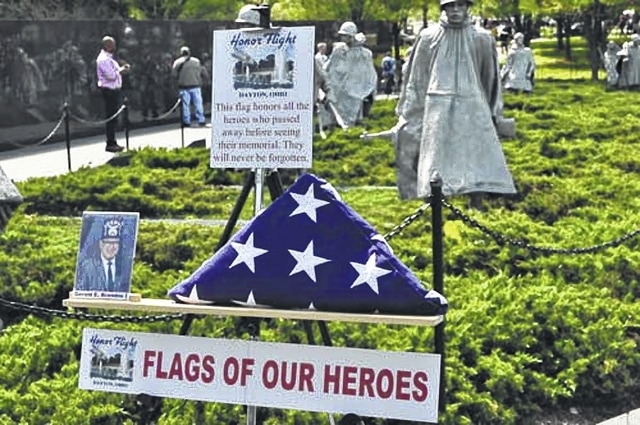 DAYTON — At least three Darke County veterans are among those who were selected to participate in Honor Flight Dayton for the upcoming Sept. 5 flight. Two more flights are scheduled for the fall, and applications are still being accepted to participate.

Honor Flight Dayton’s mission is to take veterans of World War II, Korean War and the Vietnam War to Washington, D.C., to see their national memorials. Terminally ill veterans of any conflict also qualify. The trip is offered free of charge and includes airfare, bus transportation in Washington, meals, T-shirts and disposable cameras.

Board member Jim Caporini said the flight is always looking for more veterans to participate. The Sept. 5 flight still has a few open spots. The upcoming flight on Oct. 3 is only about half booked, and there is another flight on Nov. 7 with many open spots.

Caporini said World War II vets are given priority and get in as quickly as possible.

“We absolutely encourage any World War II veterans, especially, to contact us,” Caporini said. “Any World War II or Korean War applications will get accepted right away. We want to get the word out. Many veterans don’t know this is available.”

Caporini said there are two veterans from Greenville and one from Arcanum scheduled for the Sept. 5 flight.

Honor Flight Dayton transports about 85 veterans on each trip, and six trips are taken each year — three in the spring and three in the fall.

Dayton is one of about 140 hubs nationwide that are part of Honor Flight.

Caporini said more than 3,000 veterans have taken the trips through Honor Flight Dayton in its 10 years of operation. Nationally, more than a quarter of a million veterans have been able to visit their national memorials thanks to the organization.

All flights leave the Dayton International Airport at 6 a.m., and the tour group returns home the same day at 10:35 p.m.

Honor Flight also offers a program called “Honoring Yesterday’s Heroes” for deceased veterans or those who will not be able to travel to their memorials. Families may submit a photo that is taken to the memorial and photographed with an American flag, then the family is provided with a print of the veteran’s photo at the memorial. For more information on that program, visit honorflightdayton.org/honoring-yesterdays-heroes/.

Applications for Honor Flight Dayton can be found at honorflightdayton.org/applications/ or by calling 937-322-4448. Family members, friends or caregivers who would like to accompany the group may do so as a guardian. The fee for guardians is $335.

Any Darke County veteran who has participated in the Honor Flight or is scheduled for an upcoming flight is invited to contact Rachel Lloyd at the Daily Advocate to share their story.