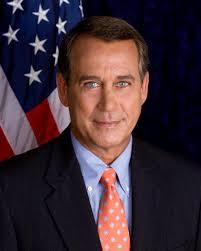 DARKE COUNTY — U.S. Rep. John Boehner announced Friday that he will resign his House seat and his speakership at the end of October.

A Republican from West Chester, Ohio, Boehner has represented Ohio’s 8th Congressional District since Jan. 3, 1991. He has served as Speaker of the U.S. House of Representatives since Jan. 5, 2011, following the Republican Party winning a House majority in the 2010 elections.

“My mission every day is to fight for a smaller, less costly, and more accountable government,” he said. “Over the last five years, our majority has advanced conservative reforms that will help our children and their children. I am proud of what we have accomplished.”

“The first job of any Speaker is to protect this institution that we all love. It was my plan to only serve as Speaker until the end of last year, but I stayed on to provide continuity to the Republican Conference and the House. It is my view, however, that prolonged leadership turmoil would do irreparable damage to the institution. To that end, I will resign the Speakership and my seat in Congress on October 30.”

Boehner added, “Today, my heart is full with gratitude for my family, my colleagues, and the people of Ohio’s Eighth District. God bless this great country that has given me — the son of a bar owner from Cincinnati — the chance to serve.”

At a press conference Friday afternoon, Boehner told those gathered, “It has been an honor to serve in this institution.”

“Let me express my gratitude to my constituents, who’ve sent me here 13 times over the last 25 years. You can’t get here without getting votes,” he said. “But — I say this often. People ask me, what’s the greatest thing about being speaker, or about being an elected official? And I said, well, it’s the people you get to meet.”

“You know, I have met tens of thousands of people in my own congressional district that I would have not met, other than the fact I decided to ran for Congress. Over the years, as I traveled on behalf of my colleagues and the party, I’ve met tens of thousands of additional people all over the country. And you meet rich people, you meet poor people, you meet interesting people. Probably a few boring ones along the way.”

“But I can tell you that 99.9 percent of the people I meet on the road, anywhere, could not be — could not be nicer than they’ve been. It’s been — really, it’s been wonderful,” he remarked.

When questioned about the timing and his thoughts prior to the announcement, Boehner said, “It was the right time to do it, and I’m entirely comfortable doing it.”

He added, “If I wasn’t planning on leaving here soon, I wouldn’t have done it. I feel good about what I’ve done.”

Boehner reiterated his contention that his resignation will strengthen Congress.

“When you are Speaker of the House, your number one responsibility is to the institution,” he said.

The Boehner resignation comes on the heels of growing discontent among GOP conservatives, many of whom feel the House Republican had not fought hard enough to stall the legislative agenda of the Democrats and President Barack Obama.

The next step will be taken by Ohio Gov. John Kasich, who is expected to announce details of a special election to be held to fill Boehner’s 8th Congressional District seat. The special election cannot be held in this November’s general election because military voting has already begun.

The special election will consist of a primary and then a general election, and potential candidates must file with their local boards of election in order to run.

The special election winner would serve the remainder of Boehner’s unexpired term. The seat will be up for grabs at the next general election in November 2016.

Ohio’s 8th Congressional District is composed of the counties of Butler, Clark, Darke, Miami, Preble and a portion of Mercer County.

Joshua Eck, press secretary for Ohio Secretary of State Jon Husted, told the Daily Advocate Friday that there is no timeline in place for the special election to be held.

“Ultimately that decision is up to the governor,” he said. “Secretary Husted has been working with the governor today, to be of assistance to him.”

Husted issued a statement, saying, “As Ohio’s chief elections officer, I am already working with the governor to ensure a smooth and fair transition as Southwest Ohio looks for a new person to represent them in Congress.”

The last time a special election was held in Ohio to replace a U.S. House member was in 2008, when Democrat Marcia Fudge was elected to fill an open seat following the death of Democratic Rep. Stephanie Tubbs Jones.

The House Freedom Caucus, the conservative Republican congressional caucus led by Rep. Jim Jordan, issued a statement Sunday saying, “The House Freedom Caucus has not yet decided who we will support for the office of Speaker of the House, nor for any positions that could subsequently become vacant. We look forward to meeting with each of the candidates and our Republican Conference colleagues over the coming weeks in a careful and deliberative fashion to discuss how best to ensure that we follow regular order in the House and give a voice to the countless Americans who still feel that Washington does not represent them.”