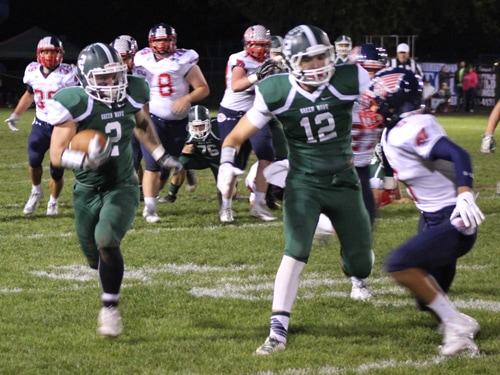 GREENVILLE — The Green Wave’s homecoming buzz was doused by a band of marauding Indians Friday night as the Greenville varsity football squad lost to Piqua 48-14.

The Green Wave offense narrowed the deficit in the second quarter with an 8-yard touchdown pass from Clay Guillozet to Justin Brown. Jordan Ernst’s extra-point kick made it 14-7.

Piqua drove for two more scores before halftime — another Tipps-Clemons rushing TD and a 22-yard touchdown pass from Rupert Delacruz to Noah Lyman.

Wave starting quarterback Guillozet exited the game in the second quarter with an undisclosed injury. He was replaced by Kyle Phillips for the duration.

The Wave entered the locker room down 28-7.

Receiving the second-half kickoff, Phillips led the Greenville squad deep into Indian territory, making it to the Piqua 23-yard-line. A bad snap and subsequent fumble recovery by Piqua on the next play, however, ended the promising Green Wave drive.

Greenville head coach Aaron Shaffer conceded this turnover took some of the wind out of his team’s sails.

“It did, a little,” the Green Wave football coach said, noting the adjustments the offense had to make for the backup quarterback’s different cadence and demeanor.

Piqua took full advantage of the game’s only turnover, driving to the Wave 2-yard-line where Tipps-Clemons ran for his third touchdown of the game, giving the Indians a 35-7 lead.

A 6-yard touchdown run by the Indians’ Allen Schrubb increased Piqua’s lead 42-7 with 4:51 left in the third quarter.

With the Indians holding more than a 30-point lead, the Ohio High School Athletic Association’s continuous clock rule — adopted in 2014 — went into effect, speeding the game along but also limiting Greenville’s chances to stage any type of comeback.

From this point on, Piqua played with abandon on both offense and defense, and a second Schrubb touchdown run in the fourth quarter put the Indians ahead 48-7.

The Greenville offense added a score with 4:15 left in the game, as Codi Byrd ran it in from 3 yards out. Ernst’s extra-point kick finalized the score 48-14.

Shaffer declined to comment on Guillozet’s injury, other than to say “it’s still got to be evaluated.”

Though understandably disappointed with the game’s outcome, Shaffer remained upbeat on his squad’s ability to bounce back.

“These kids are resilient,” he said.