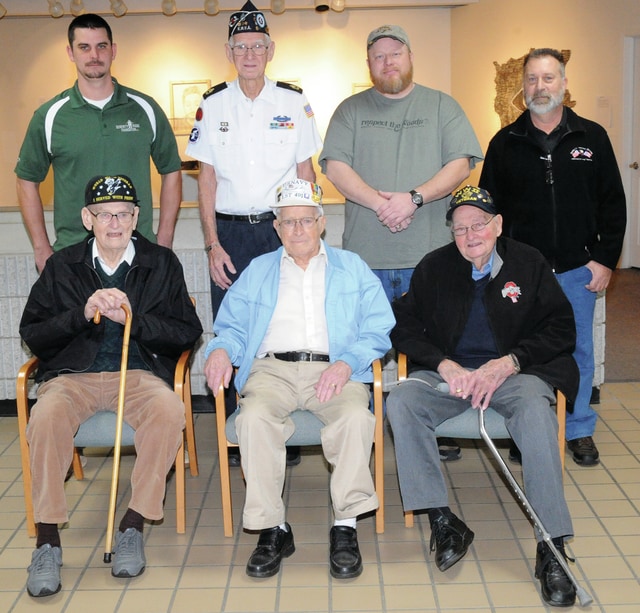 MIAMI VALLEY — As atrocities are committed around the world in order to promote ideologies or control people and resources, can you imagine a truce on Dec. 25, 2016, where soldiers lay down their arms, talk with their enemies, exchange small gifts, and even play football?

This happened on Dec. 25, 1914, with 100,000 soldiers, primarily British and German, who were battling each other on the Western Front during World War I. Fraternization with the enemy is the name of this event, and it was not to be repeated in subsequent Christmases of that war.

American 1962 Nobel Prize for Literature and author of the documentary “Once There Was a War” (1958) John Steinbeck was a World War II war correspondent and worked with the predecessor of the CIA. He was involved in commando raids against German-held islands in the Mediterranean and suffered from shrapnel wounds and, according to his own accounts, psychological trauma after the war

In “Why Soldiers Won’t Talk,” Steinbeck writes of combat, “You try to remember what it was like, and you can’t quite manage it. The outlines in your memory are vague. The next day the memory slips farther, until very little is left at all.”

As we celebrate Christmas this year, Miami Valley of Ohio veterans share bits of their memories of Christmases past in combat:

“With few comforts, we spent Christmas day going on patrol and seeking heat as the house where we billeted had no roof and no heat. The temperatures dropped to 25 at night. Even though we weren’t with our families, we were always home in spirit, all together, known as the Magnificent Bastards, and trying our hardest to make the best out of the situation. We kept our morale up by telling dirty jokes and had hot cocoa at times. In the end we were able to secure the area, destroy some caches of weapons, and make it through unscathed in our second tour in Iraq. Semper fi!”

“I was a forward observer, and I remember in our small tent area, someone had one of those little Christmas trees. We cut up a burlap sack for garland for the tree. We carried on as normal, day-to-day operations. It was early in the war, and we had only two satellite cell phones, but we all got to call home. Time was limited to one minute. I called my parents, Arthur and Marlene Hayes, and let them know I was doing okay and wished them a happy holiday. We saw firework and we had no clue who was discharging them. And on my second tour in Iraq, I came home for Christmas.”

“Little kids were always running up to our convoys, and at Christmas, we had lots of hard candies. We rigged up a sling-shot contraption to fire the candies to a distance to keep them away from our vehicles. Kids would literally strip our vehicles while we were driving down the street. Also, they were given fake I-pods to put an explosive under them.

“A lot of times we would be set up as Quick Reaction Times (QRT) teams, so we were always staged next to our vehicles. We had QRT on Christmas day, and at our vehicles we had started to eat our Christmas meal which had been trucked in from the main base. We were called out and couldn’t eat. While we were out, we had a big bag of Iraqi bread and falafels, a deep fried ball of chick peas or fava beans wrapped in pita bread with pickled vegetables We kept a jar of Nutella in our Humvees, but on that Christmas day we went around chasing bombers and eating falafels.”

“We were crowded in aircraft hangars, and Saudi Arabians prepared a Christmas meal for us with turkey, ham, stuffing and mashed potatoes. We were in a staging area getting ready to return to combat. We used an M-16 rifle for a Christmas tree, blew up a rubber glove for a tree topper, and tied ribbons (parachute cords) on the tree. We sang Christmas carols. I remember singing “Silent Night,” but there was no silence that night: there were sniper fires every 15 minutes in the field.”

“On Christmas day we were all in formation that morning, and it was cold. Hot in the afternoon, like 135. Colonel Eric Holder shook hands with each of us. I was a mechanic who had been in the infantry, and we sang/shouted, “Hup, hup cavalry ho/If you ain’t cavalry, you ain’t s_ _ _.” We had a special meal of turkey and seafood, a combination I’d never had. At 3 a.m., I had a ten-minute phone call to my mom and dad, Jackie and Dave, to tell ‘em I loved ‘em and to wish ‘em Merry Christmas. The phone reception was of the worst quality. Another thing I remember in the Sandbox was that we got a ten-minute shower about twice a week.”

“We was thinking about going home ‘cause it was getting close to time to go. Our 365 days were about up. It was just another day. Stayed in the field supporting infantry and had firing missions. So much for the truce- never even knowed it was Christmas.”

“We got off a helicopter and there was a little boy, about eight or nine, sitting on the side of the road. One of us asked, ‘What do you do when Santa Claus comes?’

The kid responded, ‘What unit is he with?’”

“In October and November of 1952 we were engaged in heavy combat In Kumwha Valley. They took us off the line into division rear to train new replacements for the injured and the dead. We were off the line until Dec 26 . As squad leader, on December 25, I left our reserve area outside of Chuncheon to recon the area we were going to move into. I was a 60 millimeter mortar man, and my brother Eldon “Bump” Shively was in a transportation company. I had been able to spend some time with him right before Christmas before going out again ‘cause he was in Korea, too. I couldn’t tell you much about that Christmas day. I’m sure we had a traditional Christmas dinner, but on December 26, we went back into the line.”

“What I can remember is we’d had lots of snow and freezing temperatures. The skies cleared. The sun came out, and the skies were full of American planes, and we knew then that we were gonna win.”

“We went into the line to replace the 36th Division. The Rhine River was between us and the Germans, so that was a pretty good defensive line. It was cold and we had not received class A boots or liners for our field jackets. We were concerned that the Germans would come across the Rhine and make a stab at us. To prevent a sneak attack, we set up trip wires and flares to give us warning. The problem was the trip wires didn’t know the difference between a rabbit – or a deer- and a German.”

“I was on survivor’s leave, had survived the invasions at Normandy and South France. I was home and listening pretty close to the radio because General Patton’s army was comin’ up from Marseille. News from Europe was kinda slow here in Ohio. And we finally heard that we were winning at the Battle of the Bulge. Patton got the credit, but Nature deserved it. Had the skies not cleared for the American planes, the Germans would have annihilated all the men left.”

“I was captured on November 13, 1944, and the camp I was in at Szubin was well run. There were two meals served that Christmas day: the regular German meal and rations we had saved from our Red Cross packages. American cooks took that food from the packages and made fancy, delicious-tasting hors d’oeuvres. That evening we sang Christmas carols. We had a Christmas tree with decorations we made from materials such as colored paper the YMCA gave us. On that Christmas day I had no idea of what was to follow from January until April of 1945. As POWs we were subjected to horrendous treatment with forced marches on starvation rations in bitter cold and were transported in crowded box cars as the Germans retreated When I escaped and crossed the pontoon bridge on the Elbe River to the Allied side, I and those with me, knew that never again would any of us be complacent about the word ‘freedom.’”

We live in troubled times, and Edsall’s words about freedom, and the terrible price that is exacted to maintain it, resonate with most of us.

On behalf of so many of us, I want to say to all men and women “Thank you for your service.” And as so many of my military friends say periodically, “The real heroes are those who died in service to our country.” May they rest in peace.