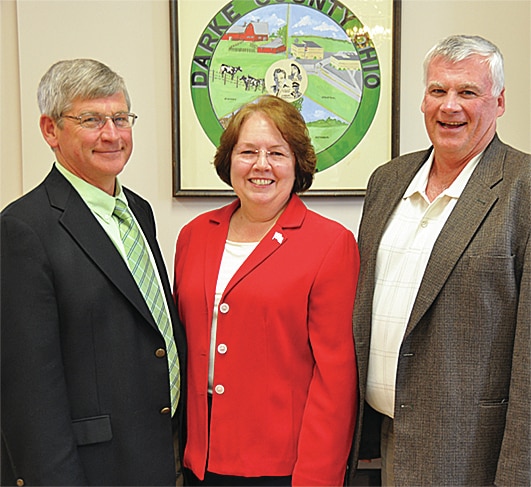 February was a mixed bag as far as the weather was concerned. One day it was in the 50’s and 60’s, the next there was a chance of snow. This has been a very mild winter so far, with very little really cold weather, so it’s been a good winter for most of us. The good news is now that February is over and March is here, Spring can’t be far behind!

February was an organizational month where the team in the Commissioner’s Office were consolidating things we needed to work on, projects in progress, and projects for the future. We continue to work on building maintenance.

One area of importance is the Courthouse steps. The steps are in serious need of repair, and we have contacted several engineering firms to give us an idea what the best solution is, and an idea on the cost. Since the Courthouse is of historical value, that also must be taken into consideration as to the design of the steps. We should know more by next month.

Another area of concern is the roof at the County Home, we have already contacted several contractors, got some really good ideas on what should be done, and we will be drawing up specs for the contractors to bid on. Thanks to those we contacted for your ideas, and preliminary costs.

Roofing always seems to be a need, and we have to do some small section work at the Wagner Avenue Government Center. The roofs out there then should be in good shape for a while.

A couple of the things in progress are the Airport improvements and the finishing up of the South Industrial Park. The Airport is moving along nicely with our plans to redo some hangars and doors, and with our continuing to seek new business there. So far, we are happy with the overall progress, but we still are working on the Chase road improvements. We will know more later.

The South Industrial Park should start to see some businesses starting their projects shortly. The Ohio Department of Transportation building will start soon, and The Erwin Brothers Truck Stop and Business is close to starting. The driveway will be given its final coat as soon as the asphalt companies start back up. The County Home and the Sheriff’s Office are in the process of being hooked up to city sewer, which will be a big improvement for both facilities.

As for the future, we still seem to be doing very well economically, and the Economic Development Office has some projects in the future. One area that is seeing a big change is in the department’s leadership. Marc Saluk, who has done a tremendous job for us, has taken another job closer to his original home. Marc will be doing Economic Development work for Hunterdon County, New Jersey. Marc will be greatly missed, but we all wish him well, and want to remind him that he is always welcome back to his adopted home of Darke County! There is a search committee in place to find his replacement, of which Commissioner Rhoades is a part of.

Things continue to develop, and if you want to be informed, visit a Commissioner’s meeting on Monday or Wednesday afternoons at 1:30 in the Commissioner’s office at 520 South Broadway in Greenville. Our building is just south of the Courthouse. Hope to see you there!