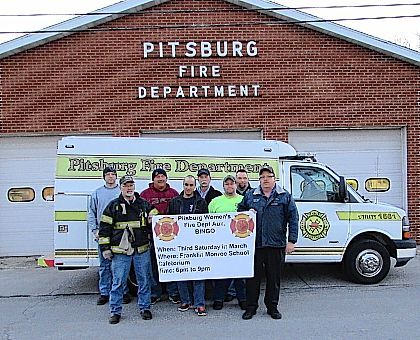 PITSBURG – The newest truck in the Pitsburg Fire Department’s fleet is lettered and polished and ready for calls.

The 2006 utility truck was purchased used by the village for $18,500 to replace the 1978 truck. It carries assorted equipment, including ventilation fans, the AED (automated external defibrillator) units, generator, portable lights and more, and will go along on almost all calls the fire department receives. The truck is in active service now.

The lettering, emergency lights and radio were purchased by the fire department’s women’s auxiliary. The auxiliary paid $4,000 for the finishing touches, which was raised during the annual bingo nights.

The annual bingo fundraiser has been going on for nearly a decade now, said Assistant Fire Chief Dave Hofacker. The events began at the firehouse but soon outgrew the venue, so they are now held at the school.

All of the labor to complete it was done by the volunteer firefighters. Withrow Signs provided the lettering, and Peterman Transportation donated two seats.

This year’s annual bingo fundraiser will be held at the Franklin-Monroe High School cafetorium March 19 from 6 to 9 p.m. Bingo cards will be $15 for 30 cards, with extra cards available for purchase. Hot dogs, chips, pretzels, cookies and other refreshments will be available for a free will donation. A 50/50 drawing also will be held. Prizes for the bingo games were donated by 70 local businesses and members of the community.