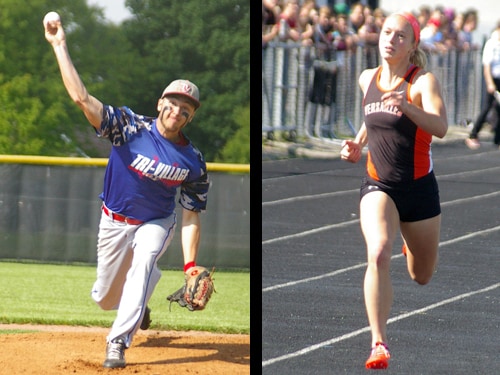 DARKE COUNTY – A pair of juniors who have continued their great years with strong performances in the postseason are this week’s Daily Advocate athletes of the week.

At last week’s Midwest Athletic Conference track and field championships Frantz set a league meet record by clearing 12 feet 1 inch in the pole vault. The record setting-performance was a continuation of Frantz’ excellence in the event as she qualified for the Ohio High School Athletic Association state meet in the pole vault as both a freshman and sophomore, finishing as the Division II state runner up last year.

“We were hoping it was going to happen,” Versailles track and field coach Mike Goubeaux said of Frantz’ MAC record. “She’s been on pace to do so. With the time she’s put in in the preseason, this summer, she really came out here with a different mindset this season to keep pushing the limits, and she’s on mark to do some even better things.”

While Frantz has excelled throughout her high school career as a pole vaulter, she’s become a more complete athlete this season. In addition to leading Darke County in the pole vault, she leads the county with a distance of 16 feet 10.5 inches in the long jump. The Versailles junior also runs the 100 meter dash and 4×100 meter relay for the Tigers.

“That’s been the big change from years past to this year – not that she hasn’t done other events – but this year her willingness to want to come out here and do more events … and she’s one of the best athletes on the team so we’ve got to have those best athletes do the most for our team,” Goubeaux said. “To be able to manage two field events, a relay with handoffs and an open, that takes experience. She’s done a great job and you can see her maturity as an athlete has really grown.”

Everything is coming together for Frantz, and she’s having the best season of her career.

“She’s got a good background in gymnastics and things that have helped her learn body control, and she’s extremely strong,” Goubeaux said. “Just a natural athlete. So all those things are culminating to what’s just been a great season this year.”

Like Frantz, Wilson has been a key contributor to his team throughout his high school career as a three-year starter for the Patriots.

But for as good as he is as a batter, Wilson is perhaps even better as a pitcher. He’s second in the county with a 0.66 ERA.

“He’s just so valuable everywhere,” Tri-Village baseball coach Jim Maples said. “He’s such a good pitcher. We hate to take him off of shortstop, but when Jordan Buckley pitches, you know, we’ve had to put him behind the plate this year, and he’s just been outstanding there as well. He’s just a very good overall player.”

In Tri-Village’s first two tournament games Wilson also recorded four hits and drove in a pair of runs, including the game’s only run in a 1-0 victory against Mississinawa Valley.

In addition to being a great player, Wilson also is a great person off the field, Maples said.

“I don’t have a daughter, but if I had a daughter that’s who the heck I’d like her to be dating,” Maples said. “There’s not many guys I’d want to date a daughter if I had one to begin with, but if there’s one, Jonny would be the one because there’s not a better kid than him.”