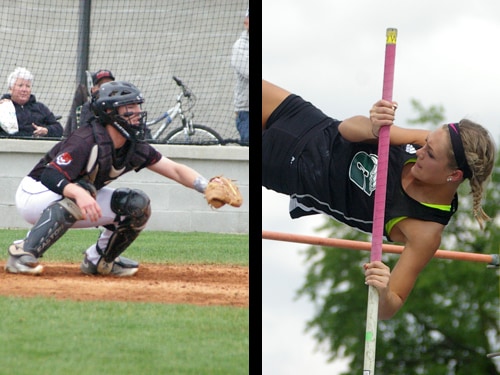 DARKE COUNTY – Two athletes who advanced to this weekend’s state tournaments are this week’s Daily Advocate athletes of the week.

“She’s really come on this last part of the season,” Greenville pole vault coach Micah Coblentz said. “The second half was definitely better than the first half of her season.”

During the season Addington worked on her technique, which made a huge difference, Coblentz said. Her work ethic is among the best on the team, Coblentz said, and she’s always one of the first to put in extra time.

“She’s has a very quiet demeanor about her, but at the same time she’s very, very determined,” Coblentz said.

Addington, who entered the state meet with a personal best mark of 11 feet 4 inches, has a quiet determination that makes her a great role model for her teammates.

“She just makes a very good role model for how they should act and perform every day in practice and at meets,” Coblentz said.

Subler also has become a leader for his team as Versailles’ starting catcher. The catcher is like the quarterback of a baseball team, Versailles baseball coach Ryan Schlater said, and Subler has handled that role well.

Most of the time, Schlater said, he allows Subler to work with the pitching staff and call the pitches himself. He makes the right call almost all the time, the coach said.

“I don’t really have to yell his name much to relay signs,” Schlater said. “He’s on top of what we need to call.”

In addition to calling a great game, Subler also provides great defense from the catcher position.

“He’s kind of a rare breed of speed and agility behind the plate,” Schlater said.

Subler is a rare player in that he’s a catcher who also hits leadoff for his team. He’s among the best in Darke County offensively with a .367 average and 16 RBIs.

“I don’t think there’s been a stretch where he hasn’t gone too far without a hit,” Schlater said. “He’s been pretty consistent.”

With Subler’s leadership on both offense and defense, Versailles won the Midwest Athletic Conference championship and advanced to the OHSAA state final four for the first time since 2000.

“We’re pretty fortunate that we do have Kyle back behind the plate, and we can rely on him for leadership,” Schlater said.