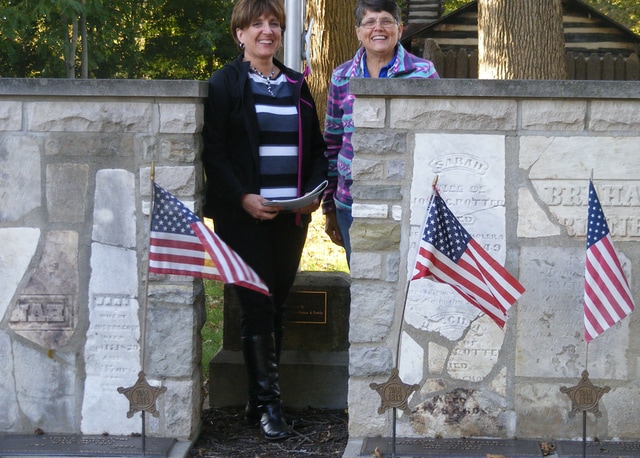 GREENVILLE — Fort GreeneVille Chapter Daughters of the American Revolution (DAR) has taken on the task of erecting a sign to reflect the history of the property in the area of the corner of Memorial Drive and East Water Street. The project is being designed by Dustin Nealeigh and has been approved by the Greenville Park Board.

“We are currently working on a project to preserve the history of a local historical landmark, Water Street Cemetery, Greenville, and have added in part to it ‘Pioneer Park,’” said DAR Regent Debbie Nisonger. “As most know, the Water Street Cemetery was neglected for years. Unknown to many, the state of Ohio had ownership of that piece of land for a brief period of time. During that time the state named the property “Pioneer Park.” Also that is when the fort replica was built. Shortly after, the property was returned back to the City of Greenville.”

She went on, “In recent years, thanks to the hard work of many, the cemetery has been restored to honor those early pioneers and founders besides providing a fort structure for community activities.”

The wooden pole is 7 feet high, and has been treated for bugs and mold. The sign is approximately 28×30 inches. It will be digitally printed and mounted to 1/2-inch wood sign board and hung with 2-inch diameter steel rings.

“The two things we are doing is surveying and providing markers/stones on American Revolutionary Soldiers that are buried in Darke County,” Nisonger said. “While working on that, my attention as regent got focused on the Water Street Cemetery. We are raising funds for a sign at the cemetery to reflect its historical history. The sign will reflect when the cemetery began and that during its history, the state of Ohio named it Pioneer Park. A lot of residents do not know that piece of history.”

According to historical accounts prepared by DAR members past and current [Anita Short, Florence Magoto and Beatrice Campbell], land off East Water Street, including the burying ground, was deeded to the trustees of the Methodist Episcopal Church by John and Margaret Devor in July 1818.

Water Street Cemetery was in use from 1816-53 with a few additional burials after 1853. Several tombstones were relocated to the Greenville Cemetery likely without the bodies due to cholera deaths.

September 1888, the city of Greenville assumed responsibility for the cemetery.

In 1901, the only known body removed from the Water Street Cemetery. The body of Maj. William Dugan, a Revolutionary soldier, was reburied in the soldier’s part of the Greenville Cemetery.

In 1932, Mayor William Kurz spoke at a meeting of the Fort Greeneville Chapter DAR concerning the cleaning and beautifying of the cemetery. A committee of five was appointed. The plan most approved was to remove all markers and record a list of names and dates on a bronze tablet which would be placed on a cobblestone monument to be erected at a suitable place on the grounds. It was about this time that the DAR chapter assumed the responsibility for the Studabaker School and their funds and efforts would not stretch to include both projects so the cemetery project was dropped but not forgotten, according to those historical accounts.

It was written for 1932-1946: “Over time many of the tombstones had fallen and were stacked in a corner of the cemetery. Some were used as sidewalks, doorsteps and a bases for garbage cans. Tombstones were also found in the Greenville Creek. Also some stones were taken to the present Greenville Cemetery but not the bodies since many bodies in the Water Street cemetery died of cholera.”

In 1946, the ownership of the cemetery was transferred to the State of Ohio, and in 1947, the cemetery grounds became known as the Pioneer Park and a fort structure was constructed as a memorial shrine for use as a permanent meeting place for Boy Scouts. Fred D. Coppock of Greenville was appointed by the governor to the board of trustees the Ohio State Archaeological and Historical Society and he served in this capacity from 1946-51.

In 1964, the cemetery was transferred back to the city of Greenville, and, in 1965, a claim deed from Methodist Church to the City of Greenville was done since it hadn’t been done so many years ago.

In 1972, it was reported that an effort was made by the Fort GreeneVille Chapter DAR to relocate the original tombstones along the west side of the cemetery. But the city only gave authorization for a bronze memorial tablet that would designate the site of the Water Street Cemetery. Although the DAR chapter felt the cemetery needed more attention and care, the DAR chapter placed a bronze memorial at the southeast corner of the lot in celebration of the chapter’s 50th anniversary.

In 1976, the city passed a resolution authorizing the Darke County Historical Society place the original headstones of the settlers on the west side of the cemetery in a cement base. But was never done.

In 1989, Fort GreeneVille Chapter Regent Florence Magoto proposed to the DAR chapter to work on returning gravestones to the cemetery. The Darke County Historical Society was in possession of many gravestones.

In 1990, Fort GreeneVille DAR met with the Greenville City Park Board to return gravestones to the cemetery. The park board decided it more feasible to have a monument with the names of graves.

The DAR chapter proceeded with plans to place a monument in the cemetery with names of persons known to have been buried there inscribed on it. Unfortunately the total cost exceeded the funds available at the time and the plan postponed.

Through the years along with Florence Magoto were many local citizens involved in restoring the Water St. cemetery.

In 1998, the park board passed an ordinance to do a wall. Among the donors were: Lydia Schauer Memorial Trust, Harry D Stephens Memorial Trust and the Greenville Masonic Temple.

The Treaty of GreeneVille Bicentennial Commission dedicated the Water St Cemetery Wall on Memorial Day, May 31, 1999.

Among the buried in the Water Street Cemetery are:

• Samuel Boyd: First white man who emigrated with his family to Darke County

• John Devor: A proprietor of Greenville, founder who laid out the town (Greenville) with son-in-law Robert Gray

Soldiers from the Civil War in the Water Street Cemetery include Newton Miller and Jackson Scribner.

It was estimated at least 90-plus gravesites at the Water Street Cemetery.

“During all this research, we are going around to all of the Revolutionary soldiers and survey their gravesites and see if there is a need for them to be repaired,” Nisonger said.

Even though the DAR got some money through grants that were written for the new signage, additional money is needed. those who would like to donate may contact Mary Jane Dietrich, the DAR librarian, of 224 Delaware in Greenville or by calling her at 548-2398.

“We’re just preserving history so everyone knows what they’re looking at,” Nisonger concluded.