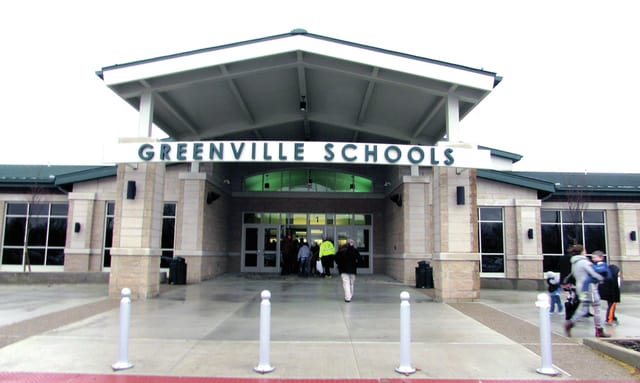 GREENVILLE – The Greenville Fire Department responded to a small fire at the new K-8 Greenville School, on Ohio Street, Thursday.

According to Fire Dept. Captain Kevin Subler “everything is okay.”

“Nobody was injured,” he said. “The school evacuated as they were supposed to. I tip my hat to them for doing such a fine job.”

According to Subler, a piece of cardboard was left inside of one of the air handling units, during construction. The air handler pushed the cardboard around and it was lodged against a motor in the air handler, where it overheated and caught fire. The smoke was sent throughout the building.

“As soon as the fire started, that piece of cardboard was burned out,” Subler said. “We were just cleaning up the ash and debris. The school was air-ventilated.”

Subler said the staff was a big help explaining the incident to the Fire Department staff, and on how to shut down the equipment system.

“That helped enable us to get into that air handler and make sure the fire was out,” he said.

School Superintendent Doug Fries said the Fire Department, the entire administration, teaching staff, and students all did an excellent job of taking care of the incident and getting the students back into the building after an “all clear.”

Parents in the district were sent a One Call Now automated phone message about the incident.