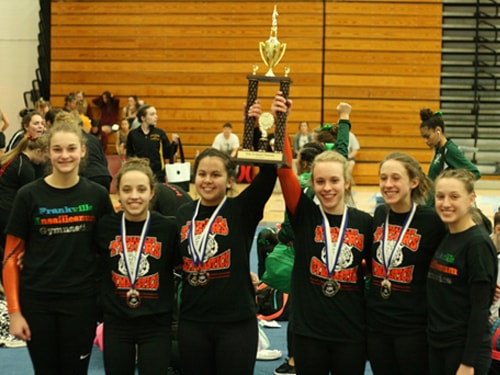 This was a competition of all the Dayton area schools from the district.

Arcanum’s Emma Smith had a good day on floor, scoring 8.15, and an increase from her last meet of 0.60 in all-around. Cheyenne White, also from Arcanum, competed that day.

Leighana Rautsaw from Franklin Monroe had an 8.125 and also had an increase in bars, beam and 0.93 increase in all-around.

Sydney Oda from Greenville had a great day on beam with a score of 8.05, an increase of 1.05 from previous meet.

Versailles’ Madison Ahrens was a second place all-around finisher with 35.125. She also placed second on beam, fourth on bars and floor and sixth on vault. She scored a 9.125 on floor.

Katelyn Kingrey from Versailles finished third all-around with a score of 37.975. She also placed second on vault, fifth on bars and beam and sixth on floor. With her improving beam score, she is rising in the ranks.

Versailles’ Jadyn Barga placed fourth all-around with a 34.85. She placed first on beam with a 9.0, fourth on floor with a 9.05, fifth on vault and ninth on bars.

Ellie Barga from Versailles placed eighth all-around with a 33.225 and third on beam. Versailles’ Jada Barlage competed on both vault and floor. Jorja Pothast of Versailles is still recovering from a sprained ankle and was only able to compete on bars.

The gymnasts will compete in the Ohio High School Athletic Association district championship on Saturday at Lakota East.