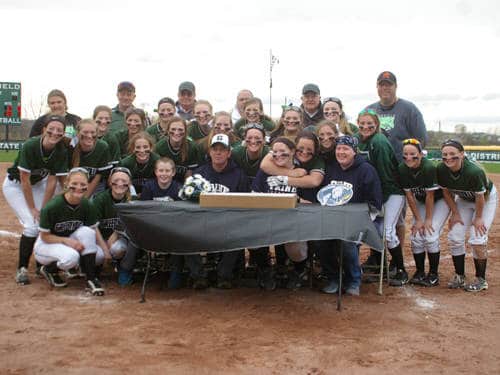 GREENVILLE – Greenville senior Alli Hill will continue her softball career with one of the nation’s top-ranked college teams as she committed to Trine University following the Lady Wave’s game on Tuesday.

Hill, the daughter of Cindi and Ronnie Hill, is joining a Trine team that currently is ranked fourth in the nation in NCAA Division III. The Angola, Indiana-based team is 24-2 this season.

Hill was attracted to Trine because it provides a similar environment to Greenville, she said.

“I’m really excited for the future and what it holds,” the Greenville senior said. “Their environment is much similar to our high school environment. They’re a great team, and I just can’t wait to be part of a winning team in college.”

Hill is a four-year starter for Greenville, earning Greater Western Ohio Conference honors in each of her first three high school seasons including being named first team GWOC North as a sophomore. The past two years she helped lead the Lady Wave to the regional finals of the Ohio High School Athletic Association tournament.

Greenville softball coach Jerrod Newland encouraged Hill to commit to Trine so she’d have an opportunity to continue competing for championships.

“She could be on the team gets over the hump for them because they’ve stubbed their toe a couple times and they’re at their peak of their softball success,” Newland said.

Hill can play any position on the field. She’s currently Greenville’s starting catcher and also played some first base Tuesday night. She was a starting outfielder as a freshman and sophomore, and during her junior year she even pitched in four games.

“She can play every spot on the field,” Newland said. “She’ll do whatever the team needs to get the job done, and that’s what makes Alli Hill a special person.”

“I have a great chance of earning my position as a catcher next year,” she said. “I just want to play all four years; that is my main goal.”

Newland also said he thinks Hill can contribute right away for Trine.

“She’s a competitor and a bulldog, and she’s going to go in and thrive at the competition there,” Newland said.

Hill said she’ll be anxious but embraces the opportunity to face a high level of competition in college.

“I’m really nervous, though,” she said. “It will make me work hard, which is great. I’m really excited for that.”

Hill is a hard worker and a great teammate, Newland said.

“She always worries about everybody else, and she’s a great mother hen,” he said. “She’s so competitive; it’s almost too competitive she’s so hard on herself if there’s such a thing. Perfectionist. Top 10 in her class. You couldn’t draw up a better kid than Alli Hill.”