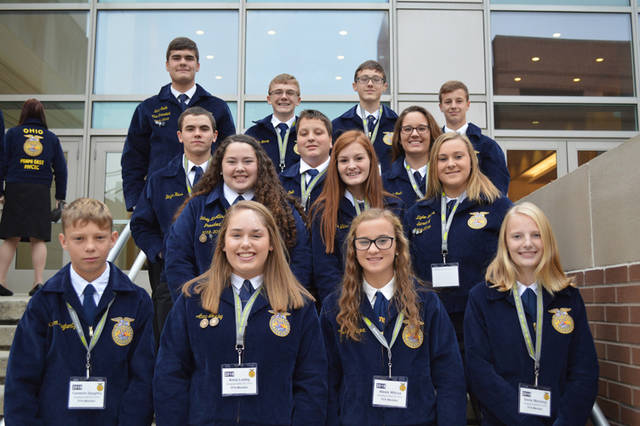 INDIANAPOLIS – A highlight of the Arcanum-MVCTC FFA Chapter’s trip to the National FFA Convention was the chapter’s Agricultural Technology and Mechanicals Systems Career Development Event team being named the 16thoverall team in the nation and earning a silver rating.

This team qualified for the national competition after earning first place in Ohio. Team members were Alex Weiss, Cael Gostomsky, Ethan Garbig and Levi Walker. Weiss was the highest placing individual on the team and earned a gold rating.

Agricultural Technology and Mechanical System is one of 25 career development event areas, covering jobs skills in everything from communications to mechanics. The participants took a written test and demonstrated their skills through hands-on activities in machinery and equipment systems, electrical systems, energy systems, environmental and natural resources systems and structural systems.

Traveling with the Arcanum MVCTC FFA Chapter were students from the Milton-Union MVCTC and Miami East MVCTC FFA chapters.

The “Just One” theme for the convention was chosen because one moment, one encounter, one opportunity is all it takes to radically change the course of people’s lives. It highlights the importance of each individual “Just One” step toward growth as members work toward the FFA vision of growing leaders, building communities and strengthening agriculture.

Almost 70,000 members, parents and guests were in attendance at the National FFA Convention. Previous conventions were held in Kansas City, Missouri, and Louisville, Kentucky.

FFA makes a positive difference in the lives of students by developing their potential for premier leadership, personal growth and career success through agricultural education. FFA membership today is comprised of 653,359 student members in grades seven through 12 who belong to one of 8,568 local FFA chapters throughout the United States, Puerto Rico and the U.S. Virgin Islands.