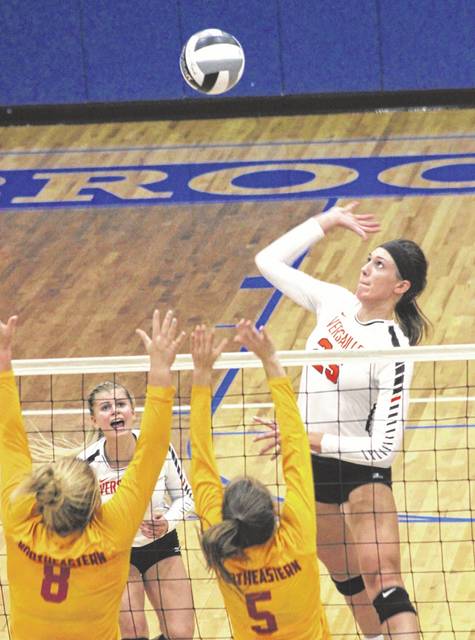 VERSAILLES – There is a familiar feel to the volleyball season at Versailles this week.

The Tigers have been here before. In fact, they have been to this point in each of the previous five seasons dating back to 2013 when they were crowned the Division III state champions for the first time in school history.

And now, they are back to the D-III regional semifinals where even their opponent is familiar. Versailles takes on Miami East at 7:30 p.m. tonight at Kettering’s Trent Arena.

“I think it is awesome to be back to this point in the season,” said senior Liz Ording, a four-year varsity player. “It’s been something we’ve been looking forward to all season. We’ve worked hard for it and I think coming off of last Saturday we have really strong energy with each other and I think we are ready for it.”

“It’s amazing to come back this far again this year,” junior Lindsey Winner said. “It shows the type of teammates we have and how everyone knows what their job is and what needs to be done to get this far. We all just click and work well together. It’s great.

“Having been there last year and playing Miami East last year too, we know what they like to do so if we can come out and have the energy like we did on Saturday we’ll be all right,” Winner added.

Winner and Ording compliment each other on the court. They are the team leaders in kills – Winner has 325 and Ording 312 – and are the leaders in many other ways too.

“They are really crucial players and a very big part of our offense,” third-year coach Kenzie Bruggeman said. “They are super hard workers and they are the girls we relied on even over the summer to keep the intensity high and to do the nitty gritty stuff like the workouts at 6 a.m., the conditioning when we would come in and just keeping that positive energy high. So they are girls that I rely on for multiple things, not just the volleyball side of it.”

Bruggeman said Winner has really come into her own this season, particularly through this playoff run.

“Lindsey has been really big for us the last few weeks,” Bruggeman said. “Her first two years on varsity we really focused on her blocking and getting her technique down because we had other offensive threats then so it wasn’t as big of a need. Now she is stepping up to a different role where we not only need the blocking but her offense as well.

“She has really quickened up her arm swing and is able to work on her transitioning and where her feet need to be,” she continued. “She is super athletic so in putting all those pieces together she is starting to figure out what way she has to move her arms to get the type of swing she wants. It is just really coming together.”

Bruggeman bragged on Ording too.

“I remember (Liz) coming in as a freshman when Karla Frilling was the coach and the first serve she took (Carla and I) looked at each other and were like she is so natural. I was JV coach then. It was my second year here at Versailles and right away we both knew we wanted to get started working with her at the varsity level.

“She has been mostly fine-tuning herself on where the cuts are and what are going to be the smartest plays knowing that a tip scores the exact same amount of points that a big kill does,” she continued. “She is just a super great player and has really come together. She is very coachable and always wanting to get better and is never satisfied.”

Ording called Winner her “sidekick” in the front row and said is a go-to player.

“Lindsey is an awesome player,” Ording said. “She’s like my sidekick on the front row. We work well together and I know that if we need to put a ball away we can always go to her and she will do it for us.”

Winner called Ording a “great leader” who knows when to have fun and when to be serious.

“Liz is a great leader,” Winner said. “She knows how to have fun, but yet whenever it gets tough she knows we have to dial it down and get serious. She knows what we have to do to get the next point.

“We are good friends,” she continued. “We were on the same club team last year and she hung out with my sister Danielle (a member of last year’s championship team) too, so that is how I got to know her.”

But success doesn’t come without some doubts and after graduating seven seniors from last year’s state champion squad, there was an influx of some younger, first-time varsity players this year causing a little it of doubt in the beginning as to whether this perennial playoff program could sustain it’s success.

“There was maybe a little doubt at the beginning of the season that we could get back to state,” Ording said. “But after we started picking stuff up I knew we had the potential. We have been working hard in practice and I think we’ve made great strides.”

Ording and Winner both pointed to a match with Fort Recovery late in the regular season as a turning point for the team.

“I feel like we really kicked it in the Fort Recovery game,” Ording said. “We all knew that was going to be tough competition and in the fifth game we just rocked it and that’s when I knew we can totally do this.

“It is so important for us to get back to state,” she continued. “I think going out with a bang would just top off my senior year, and being together as a team and continuing to work hard in practice and getting there would just be awesome.”

Winner agreed with the feel after the Fort Recovery match.

“We were just clicking so well,” Winner said. “We were up by a lot and they started coming back, but we didn’t get frazzled. We just knew that we needed to get these last two points and we win.”

Since defeating Fort Recovery, the Tigers have won 12 of its 13 sets in the tournament. The beat Meadowdale 3-0, Northridge 3-0, Springfield Northeastern 3-0 and Cincinnati Hills Christian Academy 3-1. Coach Bruggeman credits part of her teams’ postseason success to their strength of schedule. The other part goes to her dedicated athletes.

“It is just so huge to be able to have the type of teams on our schedule every week to be constantly pressured and constantly exposed of what our weaknesses are and that was our whole entire regular season,” Bruggeman said. “No matter what team we played they knew what our weak points were and who to serve at and how to break us down, and a lot of the times it wasn’t athletically it was mentally. We have had the athletes all year, it’s just a matter of them figuring out how to click and trust in each other.

“It was essentially a whole new team out there,” she continued. “There were quite a few seniors that graduated last year so we had a lot that came in as well so they were getting accustomed to the varsity level and the people who had been part of the team last year were trying to get those girls to the same level and we literally took all regular season to figure that out. We do a lot of mental training on top of the physical training and it was something that I think we all were on the same page. We were frustrated, but we knew we were going through it for a reason and we had to just rely on each other and just narrow it down and not look at the big picture. We knew we were going to have a tough schedule but it was all about how can we get better and get 1 percent better even if it means we take a loss. It was a rough season because everyone likes winning, but we knew who we were playing and we knew that the losses we took were to teams that were great programs. You look at everyone of our losses and most of them are still in the tournament.”

Despite the frustration of the regular season, there is a calmness in this postseason push, according to Bruggeman.

“Being at this point again is calming for a lot of the girls as most of them have been here before,” Bruggeman said. “Even though we graduated seven seniors there are still eight other girls on this team that were part of that run last year, so they are back. It’s not something brad-new and novel, so I think that brings a lot of calmness to the court. It will be exciting on Thursday.”

“To get back to state this year, it’s going to take determination, a bunch of confidence in yourself, energy and just knowing that you can do it,” Winner said. “Having been there and won it last year helps a lot with all of that. This tournament run we are on is what I dream of…what we dream of. We set goals for this year and we all know where we want it to end and what place we want to end at.” 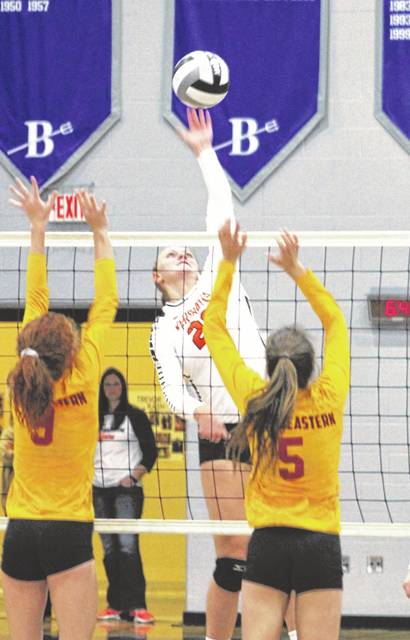