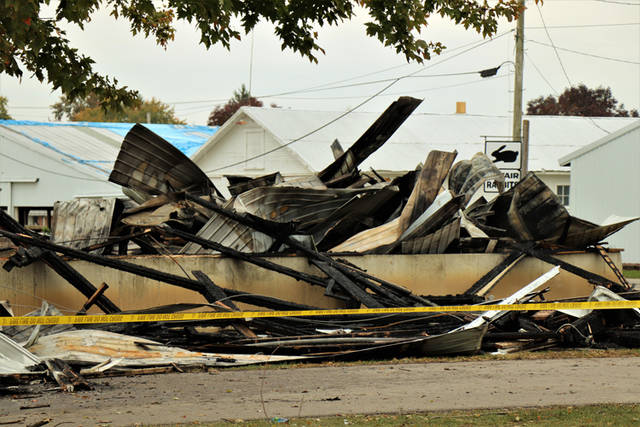 GREENVILLE — The Darke County Fair Board seated new members and discussed the future of its proposed swine barn project at its monthly meeting Wednesday night.

Cindy Riffle stepped down after 16 years on the board as newly elected members David Singer and Greg Pearson were officially seated for the first time. Riffle shared hugs and handshakes with several of her fellow board members, as well as congratulating the new additions. Some long-time members of the board had parting words for Riffle, as well.

“Cindy, I truly want to thank you for these 16 years,” newly re-elected treasurer Doug Martin said. “I’ve learned a lot from you.”

Martin and Jerry Marker were nominated for the role of vice president of the board. Marker won the resulting vote.

The board also discussed its plans for the new swine barn construction project. During October’s meeting, board members voted to contribute $3,000 toward a feasibility study for the potential $1.8 million construction of a new swine barn. The Swine Committee, Goat Committee and Darke County Barrow Boosters each had pledged an equivalent amount toward the total $12,000 cost of the study.

Plans for the new barn were called into question, however, following the Oct. 25 fire that destroyed the existing swine barn. According to Fair Manager Brian Rismiller, the investigation of the fire is ongoing, and board members planned to meet with investigators, fire marshals and representatives of those whose property was destroyed in the blaze Thursday morning.

“As of now, the plan is for everything to go forward,” Fair Board President Dean Neff said. “Unless something happens or the fire marshal says different, of course.”

Board member Doug Martin announced that the Dog Committee had decided to contribute to the project as well, bringing the amount contributed by each party to $2,400. Martin also made a motion to allow Matt Hughes – whose firm, Fair Funding LLC, had been engaged to conduct the feasibility study – to hold those funds until the board makes a final decision about whether to proceed with the project.

“He said anything we need, all we have to do is ask,” Neff said.

The board also said it is soliciting bids for possible security cameras to be placed throughout the Fairgrounds, voted to pay several bills and approved the trade-in purchase of a new lawn maintenance vehicle in the amount of $3,750.