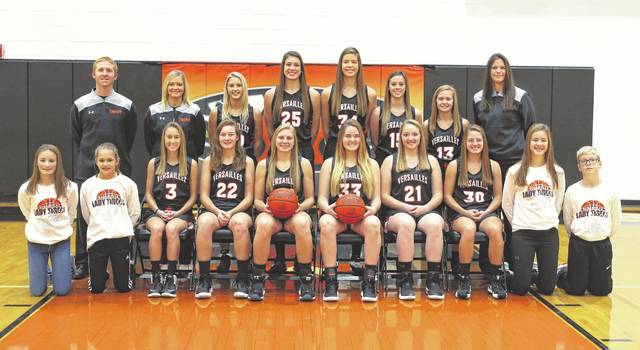 VERSAILLES – The Versailles girls basketball team is getting a later start than most other schools in the area because of the volleyball team winning a state championship recently.

There are 10 volleyball players in the basketball program, so while there may be some struggles in the beginning as they all get into basketball shape, it’s a good problem to have, according to veteran coach Jacki Stonebraker.

“I expect to have everyone in here by Monday (Nov. 19) and that will give us three days to prepare for the upcoming weekend,” Stonebraker said. Versailles begins the season in the Bill Burkett Tournament at Tri-Village. The Lady Tigers take on Chaminade Julienne at 6 p.m. on Friday, Nov. 23 and then will player either Tri-Village or Springfield Greenon on Saturday. “It’s not a problem. I love the winning attitude they bring to the team and I hope their play just carries right over to our season.”

There are also a couple of cross country runners in the basketball program, so after running at the state meet recently, they have been delayed an extra week as well.

The Lady Tigers were the Division III state runners-up last year and though they lost five seniors from that team, they return two starters and a host of role players that will be called upon to step up even more this season.

Senior Liz Ording and junior Caitlin McEldowney are the returning starters. Both we key figures in the volleyball state title a week ago. Ording is a 5-foot-11 forward and McEldowney is a 5-4 guard.

Then some of the pieces Coach Stonebraker has to fill in around this include 6-2 junior forward Lindsey Winner, 5-10 senior forward Kelsey Custenborder and 5-7 junior guard Danielle Kunk.

“They all played a lot of good minutes for us last year at the varsity level,” Stonebraker said.

A few other pieces Stonebraker has to fit into the puzzle include seniors Savannah Toner (5-8 forward), Caitlyn Luthman (5-7 forward) and Liz Watren (5-5 guard).

“We have some girls that can play both guard and post so I actually feel very fortunate because we can throw a 6-foot team out there and do pretty well, and we can throw a 5-5 team out there and do pretty well,” Stonebraker said. “I think we have that option this year to go big or to go small depending on our opponent. We typically like to go three guards and two post, but some of our guards are bigger like Kelsey Custenborder, who is 5-10 and she can handle the ball and shoot from the outside so it is nice to have that taller guard out there to see over.”

Naturally, things can get tough when you play in the Midwest Athletic Conference, but it’s not just that. The Lady Tigers also play a challenging non-conference schedule against teams from the Shelby County League and the Cross County Conference.

“Our league is phenomenal and I love it,” Stonebraker said. “Game in and game out it doesn’t matter who you play, Thursday night is going to be a test for you. Our non-conference schedule is just as good with teams from the SCL and the CCC that we are picking up this year.

“Again, we play 22 games and those are just practice for the last eight,” she continued. “I just feel like our teams get better as the year goes on. We have droughts and really bad weeks where it looks like we haven’t even practiced, but it is an extremely long season and hopefully by the end they just have that grit that you want.”

A few more players that will round out the varsity roster include senior Rachel Lyons (5-9 forward), junior Hannah Barga (5-7 guard) and junior Brooke Stonebraker (6-3 forward).

“Rachel is a nice post player who will see some minutes,” Stonebraker said. “She is undersized, but knows how to use her body really well. Hannah Barga comes off our state team last year who practiced a lot with us in the end. She’s a nice little guard, very coachable kid. I love her grit and determination out there. She doesn’t try to do too much but does her job. Brooke Stonebraker can face the basket or go around and grab some rebounds for us.

“Katelyn Marshall is another junior who is a tough kid out there and does what she needs to do to help our team,” she continued. “That’s what I feel like the team is made of. A lot of unselfish kids. Sometimes they are too unselfish. I like them to do a little bit more sometimes, but that’s what makes us up is the unselfishness and playing like a team”

Losing in the state finals last year does give Versailles some motivation this year, according to Stonebraker, but she also thinks her players will do a nice job of just moving on.

“I think I took it harder than the girls last year,” Stonebraker said. “It was just a special team last year and I had a lot of fun with them, but it will motivate these girls in 22 games. Once it hits February that will be our motivation. Right now we are just trying to get better as a team.”

While the Lady Tigers have experienced a lot of success in Stonebraker’s now 16 years as head coach – they’ve won two state championships and been to the finals on multiple occasion – they are never satisfied.

“We remind them every day that the target is on their back and that everybody wants a piece of you,” Stonebraker said. “Everybody wants to beat you and everybody is going to give us their best game. We know that so we just have to go out there and fight. Again, we take it upon ourselves to make sure we focus on ourselves and that we are getting better and not worrying about the other team until the end.

“We can’t get too high and we can’t get too low,” she continued. “We have stay focused on the end goal. I don’t really know where everyone is going to be just yet. It is going to be 3-4 weeks into the season before we get out roles set just because we are getting started late, but it has been great having the success in the fall sports. I hope that it carries over to us, but we can’t take anything for granted. We have to keep fighting every day.”