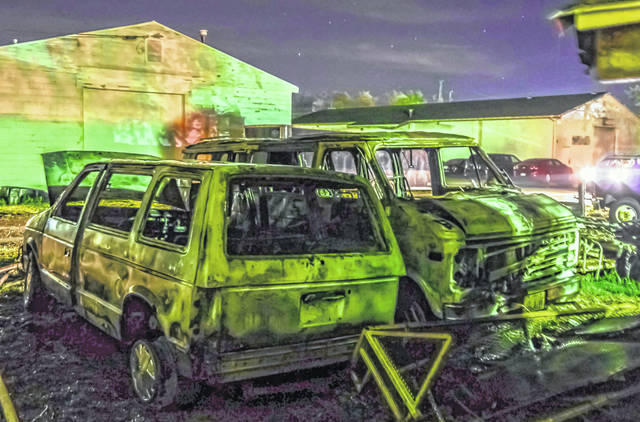 GREENVILLE – The Greenville Fire Department is investigating an early Monday morning incident after two vehicles were destroyed in a fire that officials believe to be suspicious in nature. At approximately 1:30 a.m., emergency personnel from Greenville City Fire Department as well as Greenville Township Rescue and officers from the Greenville Police Department were dispatched to the area behind 709 Riffle Avenue in regards to a vehicle fire near a structure.

According to the Greenville Fire Department, arriving crews found heavy smoke and flames coming from two vehicles in close proximity to a structure. Firefighters were able to quickly contain the fire and prevent the blaze from spreading to a nearby garage and shed and prevent any major damage to those structures.

Lost to the fire were two vehicles, a full-size 1985 Chevrolet van and a 1989 Plymouth Voyager minivan. According to the owner of both vans, Jim Hardy, neither of the two vans had been running for a short while and had no battery power to the vehicles. “I tried my best to get out there but with me, in this wheelchair, I couldn’t do much of anything more than call for help,” commented Mr. Hardy. “It’s sad. I remember building that clubhouse out there, which was damaged, for my son Jimmy and his cousin Alyson and watching them play in it. It looks like it’s going to have to be torn down now,” he added. “Who would do something like this?”

The cause of the fire is unknown at this time; however, it has been said to be suspicious in nature. The fire will remain under investigation by the Greenville City Fire Department.