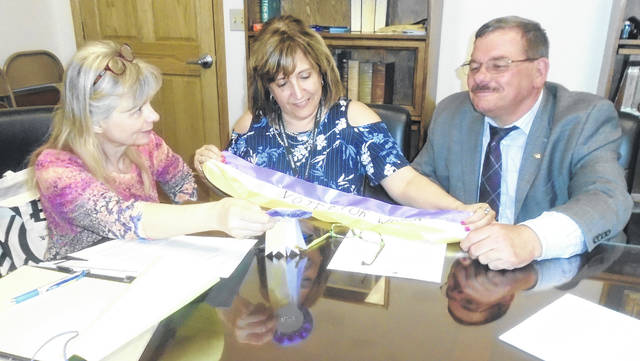 GREENVILLE-A local committee has been busy readying for the upcoming 100th anniversary of Ohio Ratifying the 19th Amendment, women’s right to vote.

The Fort GreeneVille Chapter Daughters of the American Revolution (DAR) is inviting the public to attend the celebration, which will be a rally dedication followed by an old fashion women suffrage march.

The 100th anniversary dedication will be at the south end lawn of the Darke County Courthouse at 11 a.m. on June 15.

Following the dedication, the march in the street will go down Broadway, turn on Third Street and end at the St. Clair Manor (approximately three blocks). Light refreshments will be provided for participants at St. Clair Manor outside by the fountain.

The guest speaker for the dedication will be Jen Miller, executive director of the League of Women Voters of Ohio, and Jim Buchy, former member of the Ohio House of Representatives, will be the master of ceremony.

“This is a 100th Anniversary celebration and is NOT a political or women’s issue event,” Nisonger said. “The event is to honor our history and celebrate women’s right to vote. Also available will be old-fashion suffrage ribbon buttons to wear during the rally dedication and march.”

The proceeds raised will go toward Fort GreeneVille Chapter’s local scholarship for high school female students through the Darke County Foundation. The ribbon buttons are handmade for a suggested donation of $10 a piece.

Recipients of the scholarship are to be Darke County high school female graduates who meet the DAR standards.