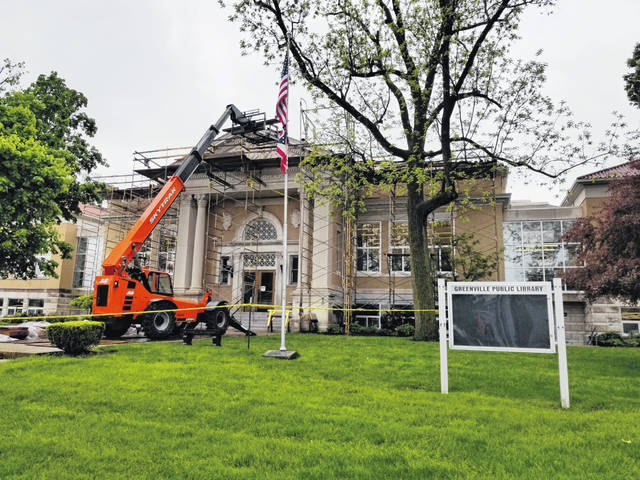 GREENVILLE – The front section of the Greenville Public Library roof is receiving a face-lift with new liners and new tiles by the Wellman Brothers Inc., out of Coldwater.

The scaffolding, evident at the front of the Carnegie building, showcases one of several roof-related projects to be done in phases over the next two to three years.

This initial roofing project at the front of the building, however, will be completed before library summer programs begin, says Reuben Kennett, maintenance supervisor for the Greenville Public Library.

Kennett believes the initial library wing addition and remodeling over a decade ago had more renovation plans for the original section. Unfortunately, in that same period, there was a reduction in the Ohio State Public Library Funding (PLF) by an estimated 30 percent.

Since that time, patch jobs to the original library roof have been completed when facing a leak but time has come for new tile and lining.

The silver lining to the project, says Kennett, is that the replacement tile will look similar to the original Carnegie library roofing tile and the tile on the newer wing additions.

“It will [still] have that historical Carnegie library look,” said Kennett, keeping to the authenticity of the 100-plus year old building.

The Greenville Public Library was dedicated in 1903, after two years of construction, thanks to funding provided by philanthropist and steel industrialist Andrew Carnegie.