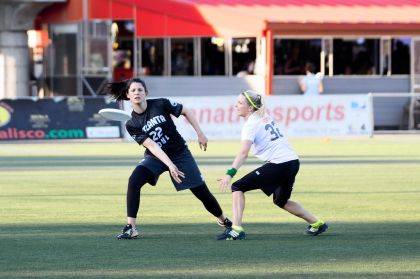 VERSAILLES – This will be the 38th year for the Versailles Poultry Days Ultimate Classic and is considered one of the oldest and top tournaments in the nation. A record number of 75 teams will be competing from all over the USA and Canada. To put this in perspective each team includes an average of 20 swelling the Versailles population from 3,000 to nearly 5,000. The resulting tent city is welcomed by village residents and the players are always friendly and with great spirit. Over the year’s friendships have formed the community looks forward to the annual flood of visitors.

The tournament is planned and ran by Rodger Oakes and Oshadega. Oshadega is a Columbus based non-profit with a mission of supporting players and promoting and growing the sport. This includes conducting several tournaments throughout Ohio including the Poultry Days Ultimate Tournament. The Poultry Days tournament is held during the annual festival and involves 28 fields spread over Heritage Park, Pheasant Ridge and one on the festival grounds.

There are several changes to Versailles Ultimate this year. First, the teams increase from 70 to a record 75 with additional matches being held on the festival grounds. Second, the Ultimate players will conduct a free youth clinic Friday, June 14. Versailles is excited to host a match between the Indianapolis Red and Columbus Pride professional ultimate teams. These teams are part of the professional women’s Premier Ultimate League. The league has eight teams located throughout the United States including New York, Texas, Georgia, Tennessee and North Carolina. The professional match will occur at 7 p.m. Friday, June 14 on the grounds of the Poultry Days festival.

Versailles welcomes visitors to the annual Poultry Days June 14-16. When planning your trip include time to watch an Ultimate match. A full schedule of contests and activities can be located at www.versaillespoultrydays.com.