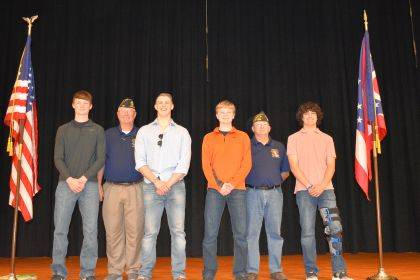 VERSAILLES – American Legion Buckeye Boys State is an eight-day, hands-on experience in the operation of the democratic form of government, the organization of political parties, and the relationship of one to another in shaping Ohio government.

Founded in 1936, Buckeye Boys State is the largest Boys State program in the nation with over 1200 young men attending. Nearly 600 high schools will be represented by junior boys heading into their senior year. Buckeye Boys State will be held at Miami University in Oxford, June 9-16.

These young adults will learn and take part in city, county and state government through a non-partisan objective education approach, with a focus on God and Country. At Boys State friendships are formed that last a lifetime.

The sponsoring organizations express a sincere thanks to Versailles High School for their assistance and especially the social studies department for their continued support.