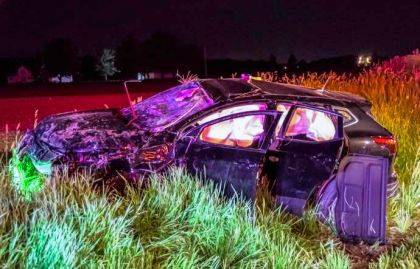 NORTH STAR – An early Wednesday morning accident has sent one person to the hospital for their injuries after the vehicle they were operating left the roadway and rolled. At approximately 2:05 a.m., emergency personnel from the North Star Fire Department and Ansonia Rescue as well as deputies from the Darke County Sheriff’s Department were dispatched to the 13000 block of US Route 127, just north of Cohee Road, in regards to a single-vehicle rollover accident with injuries.

According to the Darke County Sheriff’s Department, a preliminary investigation into the accident has revealed that a black Nissan Rogue, driven by 31-year-old Sarah Lawson of New Paris, was traveling northbound on US Route 127 when the vehicle drifted left of center and continued off the west side of the roadway, striking a ditch which then caused the vehicle to roll at least once before coming to rest at the edge of a field.

Ms. Lawson, who deputies believe may have fallen asleep at the wheel, was treated on the scene by Ansonia Rescue for minor injuries before being transported to Wayne HealthCare in Greenville where her condition remains unknown. A front seat passenger of the vehicle, 33-year-old Cayton Jensen of Richmond, Ind., was examined on the scene by EMS and refused any further treatment and transport to a medical facility.