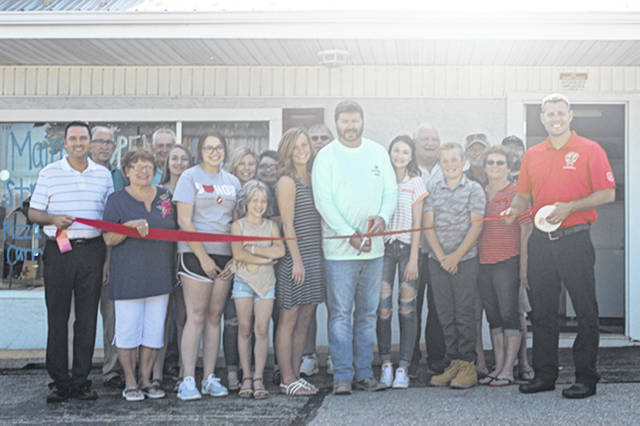 ARCANUM — It was standing room only at the Arcanum council meeting that began with an hour of public comments surrounding both the future of the former village hall and the pending new administrative building Tuesday evening.

Arcanum resident Dave Kessler thanked the council for the tour of the former village hall last Thursday, stating it was a “neat opportunity.” Before the two dozen in attendance took turns to express concerns and ideas. Some ideas included wanting to register the former village hall as a historical building to holding nothing against the new administrative building, only wanting its placement prominent as opposed to hiding it behind the VFW.

Concerns included the condition of the village hall, the lack of anything as simple as a broom being swept over the interior to a fear it would sit and further deteriorate.

Arcanum resident Jim Piel agreed with Kessler that the tour was amazing, with the comment that when everyone thinks of Arcanum, they think of the village hall. A sentiment shared by another individual stating when Googling “Arcanum” the result is always the village hall.

“It is the heart and soul of this community,” said Piel. “It’s a tragedy to think we want to abandon it.”

Piel further agreed with a suggestion made by Dave Kessler to create a committee that would decide, “Its future, not its fate.” before sharing a story of a show that had once brought in 700 people to the location.

“I would really love to see a planning commission for that building,” said Piel.

Councilman Jerry Boolman understood a need for the new building but admitted that perhaps the location was not ideal while clarifying, “We’re not in any hurry to get rid of this old building.”

“Nobody wants to see the old building go down,” echoed Mayor Greg Baumle, going on to state they would be “building the new building” while pulling minutes from September 2017 to emphasize the time already spent on the project.

“We’ll do it right,” continued Baumle, stating those on the council wanted to do what was best for the community, and optimistic they would find the right tenant for the former village hall. He encouraged Dave Kessler and Boolman to work together to form a village hall committee.

Moving on to the mayor’s report, Baumle shared the ribbon cutting for Main Street Pizza and Carryout with owners Erica and Derek Besecker.

The Besecker family had previously owned and operated The Duckfoot’s Bar and Grill in Celina. The Arcanum residents are now closer to home and happy to provide the local community with a different type of food. The pizzas are cooked on stone as opposed to conveyor with a host of other choices including but not limited to quesadillas, subs, and unique chicken rolls.

Baumle also updated council and attendees on the closing of Kaup Pharmacy, located in Sutton’s Super Value grocery store, was due to a lack of volume, dispelling rumors it was due to rent.

Bill Kessler, the village administrator, gave an update on the bridge work on Alternate State Route 49 between Albright Road and Pearl Street, which is currently a day ahead of schedule.

Kessler also shared the village had applied for an ODNR (Ohio Department of Natural Resources) grant, which was accepted but not yet approved for $50,000 towards new playground equipment at the ballfields and two new backstops.

Tim Philpot Sr. gave an update for the Service and Leisure Committee on sidewalks, curbs, and driveway approaches for the West North Street project. Owners will receive letters on the potential costs, and the committee has set a tentative public meeting time of 6:30 p.m. on Monday, July 15 on 1 Pop Drive.

Service and Leisure are also working to update the current grass ordinance, taking bids for trash collection, testing the pool for leaks is set for late August, and working on sidewalk repairs in the village.

Council meetings are held every second and fourth Tuesday at 7 p.m. at All American Clothing Company, 1 Pop Rite Drive.