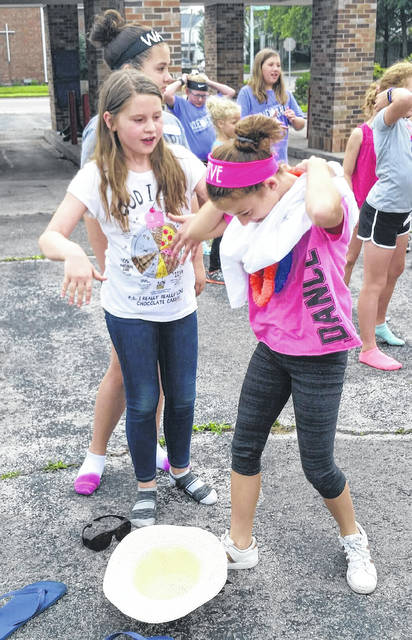 GREENVILLE – Greenville sophomore Eli Flanery is sharing positive drug- and alcohol-free messages with 39 second- through sixth-graders attending the fourth annual We Are the Majority Camp.

“It’s better for them to be here than getting into mischief,” Flanery said.

Flanery believes the experiences campers are having will remain with them as they mature and come face-to-face with making decisions that will impact their lives.

“As they become older, the risk becomes greater” of being exposed to drug and alcohol use, said Flanery, who has been involved with We Are the Majority for five years.

Flanery became a teen leader in seventh grade. At Greenville High School, he is a member of the SADD Club, is a volunteer at the Brethren Retirement Center and attends EUM Church – activities he says provides opportunities to remain drug free.

We Are the Majority Camp’s goal is to encourage young students to follow the example being set by Flanery and his fellow teen leaders.

The 30 teen leaders planned several team-building and positive activities for the week, said Kelly Harrison, Recovery and Wellness Prevention Specialist and We Are The Majority adult leader.

“We had to make some adjustments because of the rain,” Harrison said, noting how the teen leaders have met every morning to work on providing meaningful experiences for the campers.

One goal of camp was leadership training, Harrison said and included physical activities with prevention themes such Dodge the Dangerous Decisions dodge ball.

“They wrote bad decisions on the dodge ball,” Harrison said. “Some of the teens also gave testimonies of their good choices.”

Other activities included learning how to make homemade lemonade.

“We’re hoping they learn things they can continue to do with their families,” Harrison said.

Sisters Grace and Ivy Sommer both said they were enjoying their experiences during We Are the Majority Camp.

Ivy, who will be a fourth-grader at Greenville Elementary, said this was her second year to attend.

“It was really fun,” she said, “I think we should do all the same stuff next year.”

A soon-to-be sixth-grader at Greenville, Grace said one reason she signed up for her third year of Majority Camp was to continue to learn ways to “stay drug and alcohol free.”

Lucy Gettingger, who will be in fourth grade at Greenville said “I like learning to make the lemonade” adding she will be sharing her new found skill with her family.

We Are the Majority Camp experiences were held at J and J Enterprises Party Facility, where campers enjoyed fishing, swimming and treats from Kona Ice and at First Congregational Christian Church in Greenville.