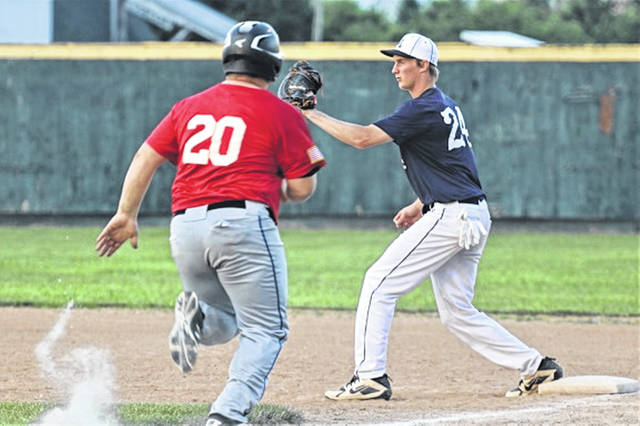 The Thunder took a 2-0 lead in the top of the second using a Zach Longfellow RBI single scoring Tytan Grote and a Tyler Beyke run scoring fielder’s choice plating Reed Hanes. Post 43 scored its first run of the night in the bottom of the inning for a 2-1 score with the teams heading to the third inning where neither team would score.

Greenville plated four runs in the top of the fourth pushing its lead to 6-1 taking advantage of run scoring double off the bat of Beyke, an intentional walk to Trent Collins loading the bases setting up a base clearing three run triple to center off the bat of Tim Lawson.

“Offensively we pressured them in each of the first two innings before Timmy (Lawson) cleared the bases in the fourth with a triple,” Henry stated. “It was a great moment for him. He started off the summer slow and has really been heating up.”

“Troy had intentionally walked Trent (Collins) in front of him (Lawson) for the second time that game,” added Henry, “so for him to drive the gap right there definitely put a smile on his face.”

“After not swinging at all this spring with a shoulder injury, Alec Fletcher has been heating up as of late as well,” Coach Henry said. “Nice to see the timing of some of these things line up with our postseason tournament occurring this weekend.”

Greenville Thunder made it a 10-1 game in the top of the sixth with a Jarin Young single and a Grote sacrifice fly to right scoring Young.

Troy battled back in the bottom of the sixth putting five runs on the board to trail 10-6 only to have Greenville plate three runs in the top of the seventh with the big hit coming off the bat of Grote.

“Kenny threw as well as I’ve seen him throw over the last two years, striking out eight while only walking one,” Henry said. “He got ahead of hitters and had all of his pitches moving.”

Tim Lawson earned a save working a third of an inning walking one and striking out the final batter of the game.