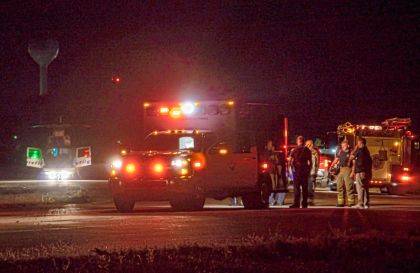 UNION CITY – A four-year-old child was injured Wednesday evening after falling into a backyard recreational fire and receiving what was described as significant burns to her arms and hands. At approximately 10:20 p.m., emergency personnel from Union City, Ohio Fire and Rescue as well as officer’s from the Union City Police Department responded to the 100 block of Ila Sue Court in regards to a child with burns.

According to Chief Mark Ater of the Union City, Ohio Police Department and Union City, Ohio Fire Department, the child was taking part in a back yard recreational fire under the direct supervision of her family when she fell into the fire suffering burns to both hands and arms. The young child was treated on the scene by Union City Rescue for what was described as significant burns before being transported to a nearby landing zone where she was flown by Miami Valley Hospital’s CareFlight to Dayton Children’s Hospital for her injuries.

Additional details of the child’s condition are unknown at this time and updates will be provided as they become available.