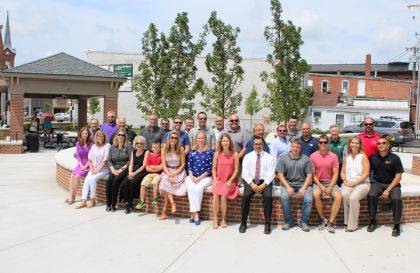 GREENVILLE – A project that has been four years in the making is finally coming to completion. The YOLO Urban Park, located at the corner of Martin Street and South Broadway, is set to open to the public on Friday.

The grand opening will be held during Main Street Greenville’s First Friday. The park officially opens at 6 p.m. and band will play from 6:30-9 p.m. and a movie will be held in the park starting at 9:15 p.m. They will have hot dogs, drinks and games.

Leading the charge to beautify the downtown district was Phillip Pierri and Matt Steyer of the YOLO Festival of Races. Several meetings with the city of Greenville’s administration and Greenville City Council set the project in motion and fundraising began.

Although originally billed as a park with a splash pad, Pierri and Steyer worked hard to clarify the park as an urban park with a water feature. The park is enclosed by a short brick wall with wrought iron fencing. An elegant water feature allows visitors to sit around the feature and enjoy the sunshine or eat lunch. They can also get their feet wet or maybe even splash around on a hot day. The park also provides the downtown district with some much-needed green space.

The task of turning a city parking lot into an urban park was neither easy nor inexpensive. Pierri, Steyer and their crew faced numerous challenges, including getting permission from the city and nearby businesses, demolition of the former Hamburger Shop, moving a power pole, running electric lines underground and fundraising. A $250,000 grant from the Ohio Department of Natural Resources was only a portion of the approximately $800,000 needed to finish the project. Proceeds from the YOLO Festival of Races’ half marathon in Greenville were also used to help build the park. However, according to Pierri, it took a community to build the YOLO Urban Park.