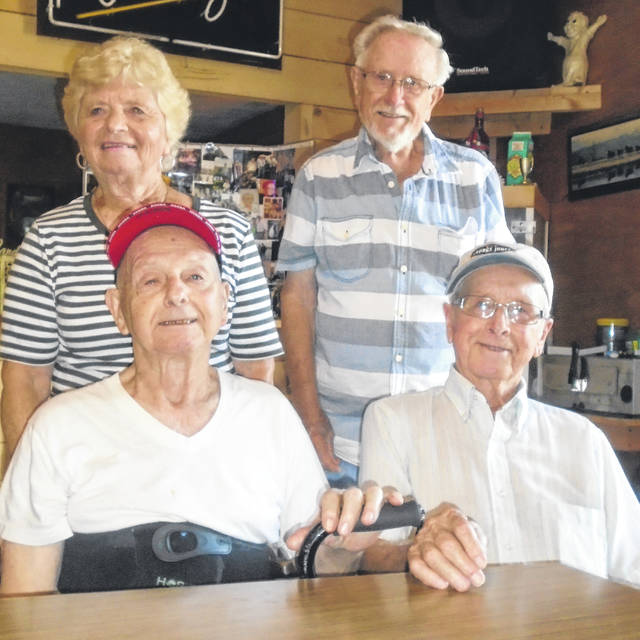 UNION CITY, Ohio — Carl Francis came from a family of 11, and he and all seven of his brothers served in the military.

Two of his brothers, Tom and Eddie, helped Carl celebrate his 90th birthday this past Saturday at the home of Carl’s granddaughter, Chrissy and husband Deke Brim’s rural country home near here.

The brothers are the children of the late Cyril and Marie (Monnier) Francis.

Tom served with the U.S Navy from 1945-57 and was aboard Ajax, a British ship that was borrowed from Britain, and visited all islands from California to Japan, including the Philippines, Okinawa, Iwo Jima, New Guinea and Australia during his stint.

“I took basic at Lackland and training at Chanute,” he said. “I served in Japan for two years and came back to California.”

He had worked as a mechanic in action control at Wright-Patterson Air Force Base before retiring.

Guest of honor, Carl, doesn’t really like to talk about his military days, but some information was obtained by those who know him as well as an excerpt from an article in Time Magazine from May 5, 1950, that was on display at the birthday party.

Carl, a private first class, was an Army medic during the Korean War. He was injured in while serving with Company B in the 45th Division.

The situation indicated Francis fired his carbine until it ran out of ammunition.

“He then ran,” the article said. “Three Chinese were after him and one threw a grenade. It exploded close behind him.”

Carl , whose birthday is actually July 24, had four grenade fragments in the back, and subsequently had surgery.

A carpenter by trade, Carl’s wife, Marie, is deceased. There are eight children (Steve, the late Beverly, Dale, Larry, Craig, Jason, Gary and Tina, and there are 22 grandchildren and 41 great-grandchildren.

In addition to Carl, five of his brothers served in the Army.

Also showing up for Carl’s surprise party was one of his sisters who is still living, Mary Brush of Troy, a widow with eight children and 17 grandchildren. Another sister and a brother, Roseanne and Dave, were not in attendance. The remainder of the family (four sons and one daughter) have died.

Carl, who lives near Union City, and his brothers go out to eat almost once a week and sometimes even go to the casino.

Other highlights at the surprise birthday party were music presented by the band Boot Hill, games for the children, a carry-in meal and making memories.