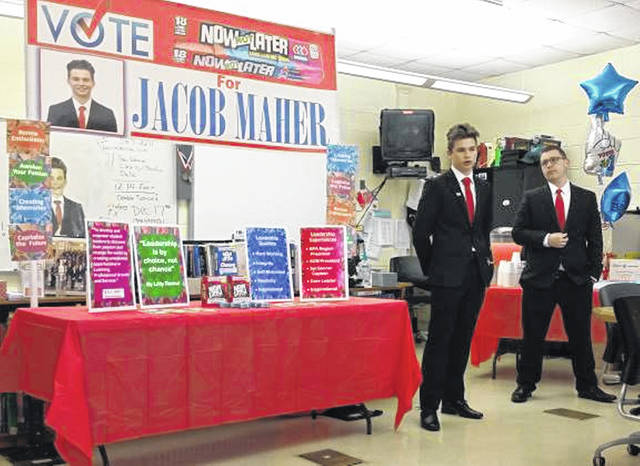 Maher, who is enrolled in the Career Technology Center’s Supply Chain Management program, said he saw a glimpse of what it meant to be a BPA officer while attending the organization’s state conference last year as a sophomore.

“I got a little taste of what BPA could offer me last year,” Maher said Monday during a reception in his honor in Dara Buchy’s Supply Chain Management classroom.

Maher and his campaign manager, fellow student Aaron Matthew, shared the process of running for state office with students and guests present duing the reception.

The process, which begins in early fall, culminates with a two-day event in Columbus. Candidates set up campaign booths, complete with slogans and information about themselves.

Candidates also give campaign speeches, write essays, complete a test and are interviewed prior to voting.

According to the BPA organization, the parliamentarian will “serve purely as an adviser or consultant who advises the President and other officers, committees, and members on matters of parliamentary procedure and promote the development, general welfare, and growth of Business Professionals of America.”

Buchy said four other students from Greenville had served as a state officer for BPA.

Maher, who ran on on a platform to create memories, capitalize of the future of BPA members, renew enthusiasm for Special Olympics fundraising, and to awaken the individual passions within BPA members, was one of 13 finalists from 67 students across Ohio who ran for office.

“It was relieving,” Maher said when he learned he’d been chosen as a state officer. “I put in a lot of work to get there.”

Maher gave credit to campaign manager Matthew for helping him during the process, which included a screening in October and the two-day conference Nov. 4 and 5.

“Jacob is a magnanimous person,” Buchy said of her student.

In addition to BPA, Maher serves as BPA District 3 President, is a Core Leader, Supply Chain Management President, and is a three-year team captain for Greenville’s soccer team.

Maher also was honored during the November board of education meeting, where he shared his campaign speech prior to receiving a plaque from Superintendent Doug Fries and board members.