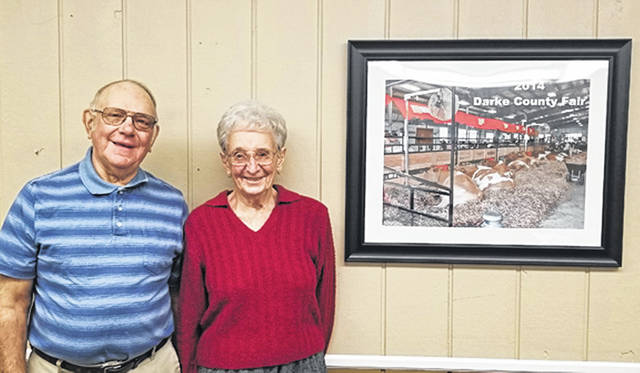 GREENVILLE — It took only seconds for the Great Darke County Fair Board of Directors to unanimously vote for the 2020 parade marshals — Lois and Gordon Smith — last week.

The couple, who will celebrate 58 years of marriage on July 8, expressed their appreciation and honor to be selected. They also shared a wealth of memories and experience with the county fair starting with Lois, whose father said she was practically born at the Darke County Fair. While born in Franklin Twp., on a farm, her birthday happens to be Aug. 22.

Lois has fond memories that include her grandparents’ stand beneath the grandstand at a time when those stands were sold at auction.

“I liked to be in there because I could look over the back fence to see what was going on out on the stage,” continued Lois. She recalled playing in the tunnel that used to be beneath the track and having meals beneath the trees near the coliseum. Her family raised cattle, and she showed cattle starting when she was just ten years old.

Gordon, from Butler County, states it was around 1951 that he first stepped foot on the Great Darke County Fairgrounds. He showed cattle, too. However, they do not recall seeing one another there.

“We got together at the Miami County fair,” said Lois, who explained she met her future husband while both were showing cattle at the neighboring county fair.

It wasn’t until after marriage that Gordon became what he calls a “county transplant.” The first year they were married, they showed cattle at six different county fairs before showing at the state fair. They practically lived in the back of their cattle truck.

In 1964, the couple moved to what is now a 188-acre farm in Bradford, to raise beef cattle and grow grain. They kept ties to a family dairy farm in Hamilton County and showed cattle for several years. Their children showed Holsteins. Then one summer, the Darke County Fair needed a Dairy Secretary, and Gordon went on to fill the position for 25 years.

Lois was then asked to oversee the north end camping, serving as a camping secretary for over two decades.

Some of the best moments when overseeing camping were to call someone on what is often a lengthy wait list that a spot is available, shared Lois.

“They were thrilled,” she said.

Both have an impressive educational background. Lois holds a degree in agriculture with a major in dairy science from Ohio State University, as well as a master’s in education from Miami University. She taught several science subjects in the Versailles school district for 31 years and also served as a principal and assistant principal.

Gordon is a graduate of The Ohio State University, too, in Agricultural Economics, and when transplanted to Darke County began work at Second National Bank. He was there for 44 years.

Life on the farm may have slowed with the Hamilton farm sold and no cattle on the homestead, but they continue to keep active, especially with the Great Darke County Fair. The couple still camps on the fairgrounds every year, with Gordon serving as assistant dairy secretary. He also assists at the Steak and Chop Tent (where he also serves as treasurer) with proceeds donated to the Darke County Junior Fair.

“I just rattle around here,” said Lois with a chuckle. “The fair has been a part of my life for as long as I can remember.”

Since both eat and sleep the Great Darke County Fair, they are looking forward to their duties as 2020 parade marshals.