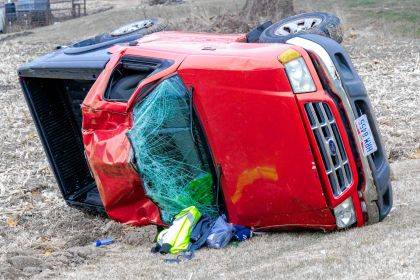 NEW MADISON – Darke County deputies have credited the wearing of a seat belt in preventing serious injuries Wednesday evening after a New Madison teenager lost control of and rolled the vehicle they were operating.

At approximately 4:45 p.m., emergency personnel from the New Madison Fire Department and Tri-Village Rescue responded along with deputies from the Darke County Sheriff’s Department to an injury accident on Hollansburg-Arcanum Road near the intersection of Stephens Road.

According to the Darke County Sheriff’s Department, a preliminary investigation into the incident has revealed that a Red 2002 Ford Ranger XLT, driven by a 17-year-old female of New Madison, was traveling eastbound on Hollansburg-Arcanum Road when the driver failed to negotiate a curve resulting in the vehicle traveling off the right side of the roadway. The teenage driver then over-corrected the vehicle and traveled off the left side of the roadway, rolling at least once, before the vehicle came to a rest on its side at the edge of a field.

The driver was treated on the scene for minor injuries and transported by Tri-Village Rescue to Miami Valley Hospital North where she is listed in stable condition.

Deputies on the scene believe that the use of a seat belt saved the teenager from serious injuries or death adding that she was able to climb from the vehicle with assistance and was up and walking when emergency personnel arrived on the scene.