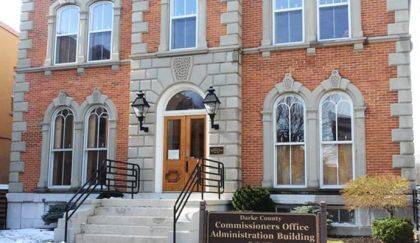 GREENVILLE – The Darke County Board of Elections met on Dec. 23 to certify petitions for the March 17, 2020 Primary Election. Many of the county offices are up for election in 2020, including two seats on the Darke County Commission.

With Commissioner Michael Rhoades announcing he would not run for re-election after his present terms ends Jan. 2, 2021, there will be a new face on the commission when a new term begins on Jan. 3, 2021. Thus far, two persons have filed petitions on the Republican ticket with hopes of filling that seat. Larry Holmes, of Greenville, and Matt Harrison, of Hollansburg, will be seeking votes in the Primary Election. The winner of that race is currently unopposed in the general election as no Democrats filed for the seat. However, there is still time for an independent to announce his or her candidacy or for a person to run as a write-in candidate.

Matthew Aultman, Republican, is currently running unopposed in the primary and no Democrat filed for that seat.

Several villages and the Darke County Park District are expected to be on the ballot in March.

Darke County – Property Tax – Additional – 1 mill – 10 Years – Upgrading, improving and expanding the Darke County Park District’s parks for conserving their natural resources and to benefit the general public; and (b) purchase equipment and personnel necessary and appropriate for management of said facilities; and (c) enabling said District to support the parks and other recreational facilities owned or operated by the cities and villages located within the Darke County Park District.