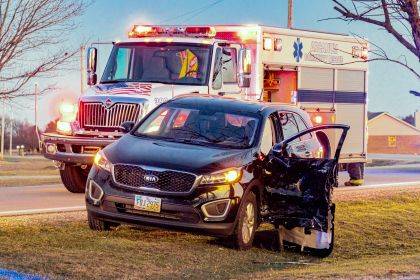 ARCANUM – Four people were injured Wednesday evening as a result of a crash that left one driver being mechanically extricated from their vehicle.

At approximately 5:14 p.m. Darke County Sheriff Deputies along with Arcanum Rescue, Gettysburg Rescue and Pitsburg Fire Department responded to the intersection of State Route 571 and Hogpath Road on a two-vehicle injury accident.

According to the Darke County Sheriff’s Department, a preliminary investigation into the incident revealed a 2017 black Kia Sorento driven by David Richey, 59, of Troy, was westbound on Hogpath Road when he failed to notice and pulled into the path of a 2007 White Mazda driven by Terry Foshee, 53, of Union City, Ohio, who was traveling northwest on State Route 571. The Richey auto was struck in the driver’s side door area resulting in both vehicles leaving the roadway before coming to a stop.

Richey was mechanically extricated from his vehicle by the Pitsburg Fire Department prior to being treated and transported by Arcanum Rescue to Wayne HealthCare for his injuries. Foshee, as well as two other occupants in his vehicle, Connie Brumbaugh, 49, of Union City, Ohio and Jena Stocker, 30, of Greenville, were all treated by Arcanum Rescue on the scene and also transported to Wayne HealthCare for minor injuries.