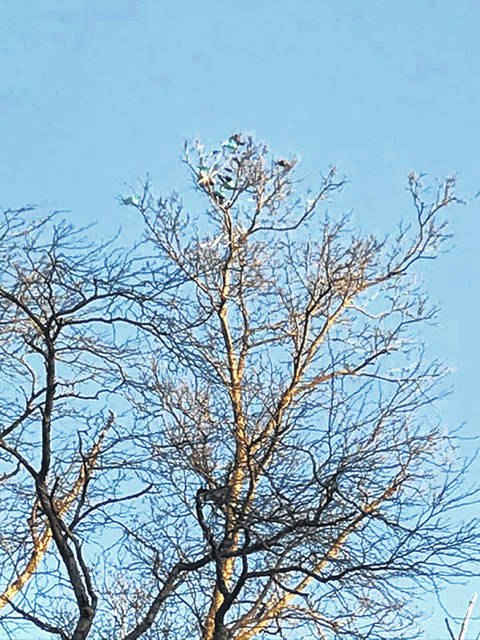 GREENVILLE — It isn’t easy to change tradition, but Mandy Martin, naturalist, with Darke County Parks, and many others like her want to change our approach to balloons.

It’s an issue many may not even be aware of — the dangers that Mylar/foil and latex balloons pose to the environment with wildlife and even livestock consuming the material or becoming ensnared to deadly results.

For Martin, the environmental impact of balloons has become a passion project over the years. She cites balloons are used primarily in the form of tradition with education the way to help individuals make better choices.

The Indianapolis Motor Speedway is an example of a tradition that has been difficult to change. The event sees the release of thousands of balloons that have made their way to Darke County, a distance of 88 miles or two and a half hours, less than 24 hours after a race.

A balloon here or there does not seem like much of an issue. However, one has to consider the bigger picture.

“I’m not talking about the kid who lets their balloon go,” said Martin. “It’s hundreds and thousands a day that keeps adding up.”

Martin shared several articles she’s collected in regards to the number of balloons found in the environment. One showcases a group of volunteers in the Great Lakes region that collected more than 18,000 pieces of balloons over two years along the shoreline.

Two preteens in Berlin, MD, started a contest to collect balloons from the beach and ocean with 1,400 collected over 90 days.

The claim that balloons are biodegradable and will break down over six months (but take as long as four years) does not help.

“Even if they did break down in six months, that’s too late, the damage is already done,” said Martin.

Along with the articles were photos of animals that had died after consuming balloons or perished after becoming entangled in balloon strings. One photo highlighted a Mylar balloon harvested into a hay bale, another a horse with part of the balloon string in its mouth, the deflated balloon hanging at the end.

Beyond littering the environment and endangering animals, another issue is power outages. To name a handful of recent incidents, on Wednesday, the Cleveland Public Power cited Mylar balloons as the reason for an outage that affected 400 customers. A Christmas Eve outage was caused by balloons in Sacramento County, Calif., with a Nevada energy spokesperson stating only a week ago that balloons were one of the leading causes for outages in southern portions of the state.

U.S. Fish and Wildlife Service and the National Audubon Society have urged the discontinued use of balloons for years. Some cities and states have taken the initiative with a ban on balloon releases. The city of Toledo prohibits the release of ten or more balloons in 24 hours. Meanwhile, other states are considering bans such as neighboring Kentucky with Bill request 999, which would see an end to intentional releases of more than 25 balloons within the next five years.

“We just need to get people to recognize the alternatives,” said Martin. She offered a host of potentials that are also listed by a nonprofit organization, Balloons Blow Inc., such as blowing bubbles, using pinwheels, planting memorial gardens, book or food drives among far more environmentally friendly options.

For more information on the effects balloons have on the environment, and alternatives, visit www.balloonsblow.org.