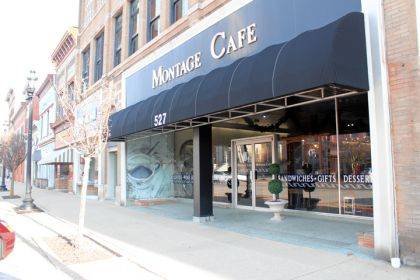 GREENVILLE – Greenville City Council will revisit the idea of outdoor dining in the downtown district. On Tuesday, Aaron Cox, owner of Montage, addressed council and asked for permission to use a portion of the sidewalk for tables and chairs.

Cox said he has been discussing the issue with the Ohio Board of Liquor Control to determine their requirements since he does serve alcohol at his business. Combined with the city’s requirement to have five-feet of egress around the dining area, Montage would have a three-foot high gated fence extending from the business. “I am asking to use 3’ 10” of the sidewalk closest to my restaurant as well as having seating underneath my awning,” said Cox. He hopes to have four to six tables.

Cox pointed out his request differs from a past requests the city has received that wanted to have a bump-out into the street. He stressed he would not be taking up any parking spots. He expects to use the area for approximately six or seven months a year and the fence would be taken down during the winter months.

He believes this will be added revenue for his business. “We have had a lot of customers in the downtown area asking for it, as well. There is really no place to sit outside except for the Coffee Pot down the street. They don’t serve alcohol and I have had a lot people come in wanting to sit outside and have a beer.” He pointed out they have never had an issue with alcohol complaints.

Cox believes it would improve the look of downtown. “Basically, every other town has it; so why can’t we be with them?”

According to Cox, Safety Service Director Curt Garrison suggested there would be a lease required on the property (sidewalk). The cost of the lease has yet to be determined, but the city’s administration will discuss the issue and bring a recommendation to council.

Once a lease is secured, Cox will take his plans to the Planning & Zoning Commission and Architectural Review Board for approval. Garrison said, “We don’t want to create a lot of red tape here. We want to streamline it, but there are some steps that we will review and go through.”

Council seemed in favor of moving forward with the outdoor dining proposal. Leon Rogers said, “I, myself, think it’s a good idea. We need to move up with the times of other cities.” Councilmen Doug Wright and Jeff Whitaker agreed.

Mayor Steve Willman addressed council and asked for a committee assignment be made to look at water rates for the city. The last increase took place in 2014. “The cost we charge for water is probably not enough to cover our cost of continued maintenance as we look forward to what we need to get done,” said the mayor. Burkett assigned the issue to the Utility Committee and asked for a report at the first meeting in March.

Garrison informed council that the $800,000 grant for North Ohio Street is no longer available. He said the state realized a glitch in their accounting system. The city’s project will go to the bottom of the list and if funds become available through the state the city could continue its project. Garrison believes it may be another year before the city gets the funding.