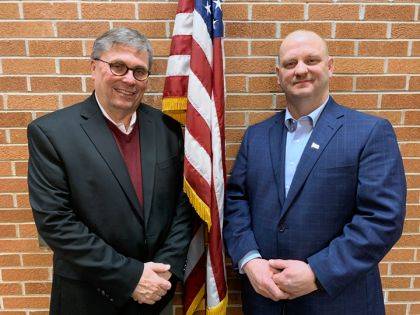 GREENVILLE – With the Presidential Primary Election scheduled for Tuesday, March 17, The League of Women Voters of Darke County is again sponsoring a Candidates Night on Monday, Feb. 24, 7–9 p.m.

Located at the American Legion Hall, Ohio St., in Greenville. The forum will focus on the contested Republican Primary race for Darke County Commissioner. The two candidates are Matt Harrison and Larry Holmes. There is no Democratic Primary for this elected office.

After two minute introductory speeches, candidates will answer questions. The public is encouraged to attend and submit written questions. Questions are then screened by a panel of League members and presented to the candidates by a moderator.

Due to the League’s policy of non-partisanship, in a race with two people, they can only feature contested races if both are in attendance. Otherwise, the candidates are welcome to briefly introduce themselves. Candidates for the Republican Primary for the U.S. House District #8, Warren Davidson (incumbent) and Edward Meer may be in attendance. Candidates for the Democratic Primary for the U.S. House District #8 are Vanessa Enoch and Matt Guyette. Other non-contested Primary candidates may be present for a brief introduction only.

The League of Women Voters is a non-partisan organization with the major purpose being to inform voters about the candidates and issues. Further information about the Candidates Night may be obtained by calling Holly Finnarn or Eileen Litchfield, at [email protected], Voter Service Co-Chairs.