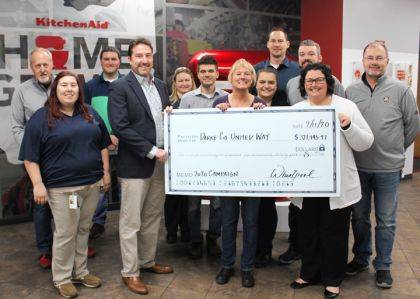 GREENVILLE – On Tuesday, the Greenville Whirlpool/KitchenAid plant presented a check to Darke County United Way for $321,495.47. This is the second largest donation Whirlpool and its employees have made to the local United Way office. The employees and company raised over $400,000 in the 2017/2018 campaign.

According to Lisa Hileman, communication specialist for KitchenAid, Whirlpool Corporation is a huge supporter of United Way across the nation. The local plant has gone from holding events and fundraisers for a few weeks to making it a year-round fundraising event. This year’s co-chairmen included Kristian Garwood and Logan Thompson with assistance from Brent Fourman.

Payroll deduction is one of the leading fundraising contributors to the Darke County United Way, but it may not be where the biggest donation comes from. The company holds product sales throughout the year and funds are donated to the local organization. Other fundraisers include food trucks, silent auctions and Jim’s Hotdog Day with a combined donation from Miami Vending and Whirlpool.

Employees were able to raise nearly $161,000 and the Whirlpool Foundation matched the donation.

Funds given to Darke County United Way address needs in four areas – Education, Stability, Health and Community Fund. Nearly every resident in the county is affected in some way by the non-profit organizations that receive these funds.