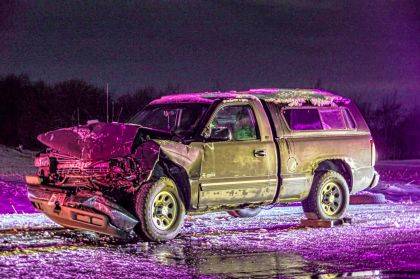 GREENVILLE – Motorists were left at a standstill early Friday morning as emergency crews worked to clear the wreckage of a two-vehicle crash. At approximately 5:33 a.m., emergency personnel from the Greenville City Fire Department and Greenville Township Rescue responded along with officers from the Greenville Police Department to the 5700 block of Jaysville-St. Johns Road in reference to a two-vehicle crash with possible injuries.

According to the Greenville Police Department, a preliminary investigation into the incident revealed a dark colored Chevrolet Silverado was traveling southbound on Jaysville-St. Johns Road when the driver of the vehicle failed to notice a Silver Mitsubishi Montero slowed for traffic. The Chevrolet collided with the rear of the Mitsubishi forcing the vehicle off the left side of the roadway.

The male driver of the Chevrolet and the female driver of the Mitsubishi, both the sole occupants of their vehicles, were treated on the scene by Greenville Township Rescue for minor injuries prior to refusing any further treatment and transport to a medical facility.