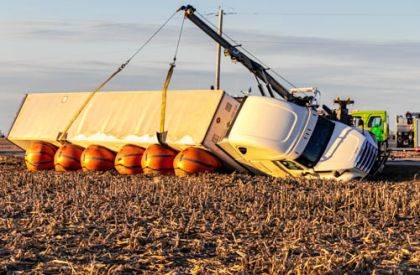 LAURA – A two-vehicle accident involving a semi-tractor and trailer and a car has led to the arrest of one driver for the suspicion of OVI as well as a hazmat spill that left State Route 49 closed for several hours. At approximately 3:53 p.m., emergency personnel from the Pitsburg Fire Department and Arcanum Rescue responded along with deputies from the Darke County Sheriff’s Department to the intersection of State Routes 49 and 722 in reference to a semi versus car injury crash.

According to the Darke County Sheriff’s Department, a preliminary investigation into the incident revealed a white 2005 Kia Optima driven by Anthony Marcum, 28, of Sidney was traveling eastbound on State Route 722 when the driver failed to notice and pulled into the pathway of oncoming traffic. The Kia was struck by a white 2018 Freightliner semi-tractor and trailer driven by Shad Duncan, 48, of Greenville, which caused heavy front end damage to the Kia and resulted in the tractor and trailer continuing off the right side of the roadway. The Freightliner came to rest on its side in a ditch along the edge of a field spilling numerous gallons of diesel fuel and toppling its load of 64,000 pounds of dry ice.

Duncan was able to climb safely from the wreck under his own strength before emergency crews arrived. The driver was treated on the scene by Arcanum Rescue for minor injuries prior to refusing further treatment or transport to a medical facility.

Marcum was evaluated on the scene by Arcanum Rescue for injuries sustained in the crash prior to his refusal for further treatment and transport to a medical facility. He was later placed under arrest by deputies of the Darke County Sheriff’s Department for the suspicion of OVI after performing poorly during a field sobriety test. Deputies transported the driver to Wayne HealthCare for further evaluation where he was subsequently released and transported to the Darke County Criminal Justice Center.

Numerous mutual aid departments including Arcanum, Laura and the Greenville City Fire Departments were requested to the scene to aid in the cleanup efforts after it was discovered diesel fuel from the wreckage entered into a nearby creek. Although the exact amount of fuel lost was not readily known the amount discovered was enough to prompt concern from the Darke County Hazmat Team.

Heavy equipment was called to the scene to remove the topsoil around the semi-tractor and trailer and the ditch that led to the drainage tile that emptied into the creek. Absorbent pads were placed in the creek to help dam and soak up the diesel fuel that was collecting on the surface of the water. It is believed that the amount of fuel lost in the incident is not enough to have any negative impact on the surrounding environment but caution will be taken as officials continue to monitor the site into the near future.

State Route 49 remained closed for several hours into the evening as crews worked to clear the wreckage from the scene and cleanup efforts of the hazardous materials spill took place.

The incident will remain under investigation by the Darke Sheriff’s Department. 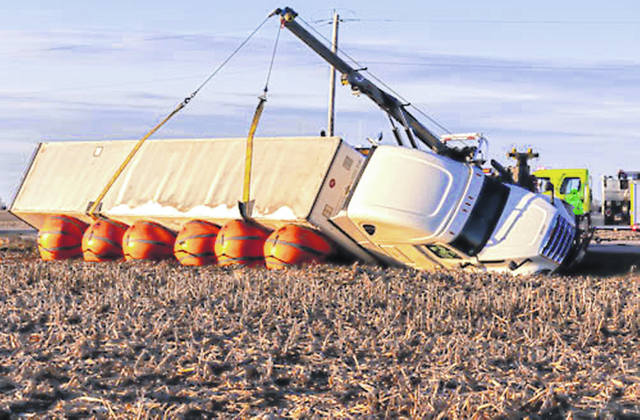 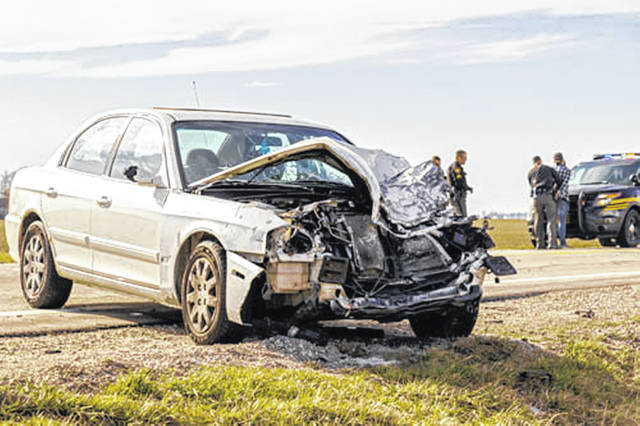 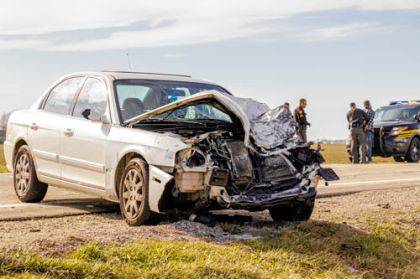