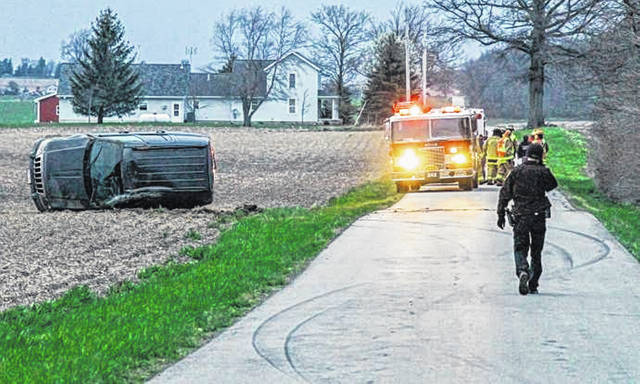 ROSSBURG – A driver was injured Thursday evening after being involved in a single-vehicle rollover crash. At approximately 7:41 p.m., emergency personnel from Ansonia Fire and Rescue responded along with Deputies from the Darke County Sheriff’s Department to the intersection of Michael Road and Washington Road in reference to a one-vehicle rollover crash with possible injuries.

According to the Darke County Sheriff’s Office, a preliminary investigation into the incident has revealed that a 2002 Silver Jeep Grand Cherokee, driven by 53-year-old Jeffery Bubeck of Rossburg, was traveling north on Michael Road when he lost control of his vehicle and traveled off the right side of the roadway. Bubeck overcorrected and continued off the left side of the roadway where his vehicle then rolled coming to rest on its side in a field.

Bubeck was able to exit the vehicle at which time he fled the scene on foot through a field. Darke County Deputies and Ansonia Fire personnel conducted an extensive search of the area locating him laying in a field on Washington Road.

Bubeck was treated by Arcanum Rescue prior to being transported to Wayne HealthCare for his injuries. Alcohol is suspected to be a contributing factor in the crash.