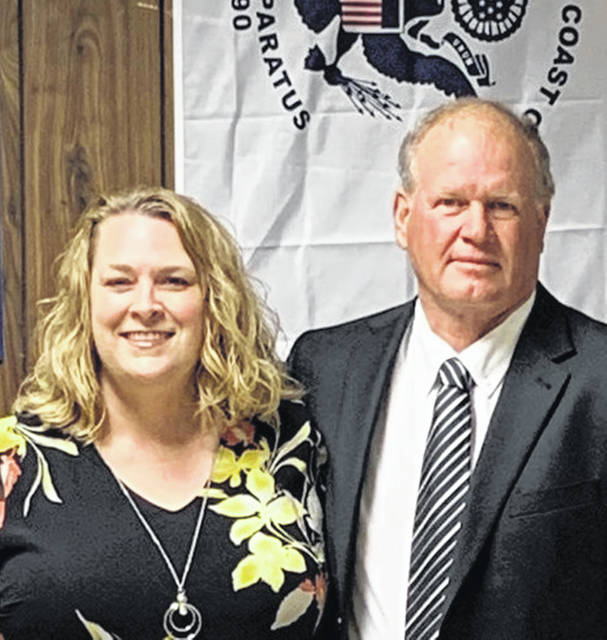 GREENVILLE — Lugene Ignaffo of Greenville was installed as president of the Ohio Elks Association State Officers this past weekend.

Typically, the installation of state officers takes place in Columbus at a Marriott during the annual Spring Convention with the state officers dressed in white tuxedos and the women in formal gowns.

This year, of course, the convention was cancelled as hundreds of people would have been in attendance.

“This year, many modifications had to be made in response to the pandemic,” Ignaffo said. “Myself and the other traveling state officers from our Southwest district were installed in a brief ceremony on Saturday at the Dayton Elks Lodge with only the officers and spouses in attendance. We took the oath of obligation led by a past state president.”

Ignaffo, who has been a member of the Greenville Elks #1139 for 23 years, has held every office within the local lodge, including being exalted ruler for five yearly terms over the years.

“In addition to being an officer at our local lodge, I help organize events at the lodge including monthly breakfasts and other special dinners at the lodge,” he said. “I also assist as grant coordinator in applying for and distributing grants from Elk National Foundation which we use to support our local community.”

He will serve one year as state president.

“I have been moving up through the state chairs over the past seven years to get to this position, which included being a state trustee for three years, among other positions,” he said.

Ignaffo said he is the second person in Darke County to serve as president from the Greenville Lodge since it has existed (118 years).

“The first was Gene Buchy, who served in 1980,” he said. “Gene was my mentor in encouraging me to start on this path.”

He went on, “As president, I travel to the six different districts in the state of Ohio to visit lodges. I oversee the state activities and work with the trustees on the yearly budget. I am the figurehead that represents the organization on a state level at charitable events, at donations of grant money, and at other big events within the organization.”

“We are also planning to attend the National Convention in Baltimore, Md., this summer in July where I will carry the Ohio Flag across the stage along with all of the other state presidents from across the country,” he said. “So far, this convention has not been cancelled, but a decision is promised by May 1.”

Jennifer, he said, is now serving as the First Lady of the Ohio Elks Association. She is a sixth-grade teacher in Preble County.

His children are: Jason Ignaffo, who is the current exalted ruler at Greenville Lodge and involved in the district chairs of the southwest district, and a lead machine builder for a company called PDSI; Becky, who is married to Ryan Borowski, and is an SRO at Greenville Schools as well as being secretary at the Greenville Elks Lodge; and Austin Ignaffo who is serving with the U.S. Navy in Iwakiuni, Japan, and is married to wife Lauren.

“Between Jennifer and myself, we have five grandchildren,” he added..

A 1980 graduate of Tri-Village High School, he is owner of Ignaffo Roofing, have worked in construction for 30 years

He is a member of the Moose Lodge and Greenville Veterans of Foreign Wars. He also has

a membership at Turtle Creek Golf Course where I play in two golf leagues.

“The B.P.O.E. (Benevolent and Protective Order of Elks) is the greatest fraternal organization in this country,” he replied when asked what the Elks means to him personally. “The Elks is a charitable organization whose main focus is providing opportunities and support for Veterans, youth programs and local communities. It is also an organization made up of kind, selfless, hard-working people who have become not only my friends, but my family as well.”