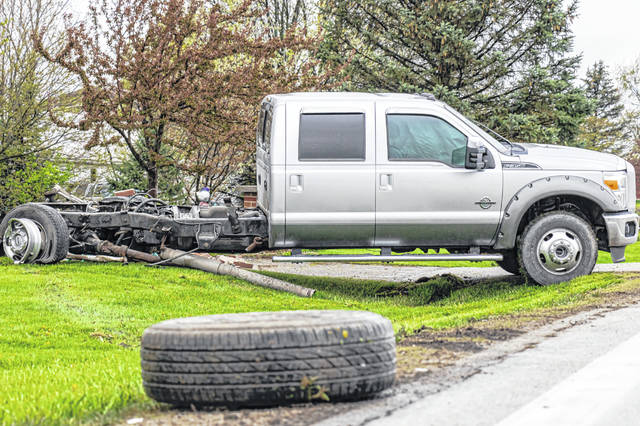 ARCANUM – The intersection of US Route 127 and State Route 503 was closed Thursday afternoon following a two-vehicle crash that left damage to a home and a power outage to the surrounding area.

At approximately 2:28 p.m., emergency personnel from the New Madison Fire Department and Tri Village Rescue responded along with deputies from the Darke County Sheriff’s Office to the intersection of US Route 127 and State Route 503 in reference to a two-vehicle crash with possible injuries.

According to the Darke County Sheriff’s Office, a preliminary investigation into the incident has revealed that a silver Ford F-350 was traveling westbound on State Route 503 when the male driver of the vehicle failed to yield to and pulled into the pathway of oncoming traffic. The Ford was struck in the rear passenger area of the vehicle by a gray Freightliner tractor and trailer traveling southbound on US Route 127.

The Ford pickup truck continued westbound coming to rest in the front lawn of a private residence located at 2873 State Route 503. Debris from the vehicle struck and left heavy damage to a home located at 2878 US Route 127 situated on the southwest corner of the intersection.

The Freightliner traveled off the right side of the roadway due to contact with the Ford through the front lawn of 2878 US Route 127. The tractor and trailer then made contact with and broke off a utility pole before coming to rest nearly 200 feet into a field.

Deputies on the scene reported that residents of the 2878 US Route 127 home, damaged as a result of the debris from the crash, were not at home at the time of the incident. A tire from the Ford F-350 became dislodged from the truck flying through the air slamming into the home.

A large hole could be seen leading into a bedroom at the side of the house. Additional damage could also be seen at the front of the home from smaller debris.

Representatives of Dayton Power and Light estimated that nearly 126 homes were left without power in the area due to the downed power pole and lines. It was unclear at the time how long those homes could expect to be without power.