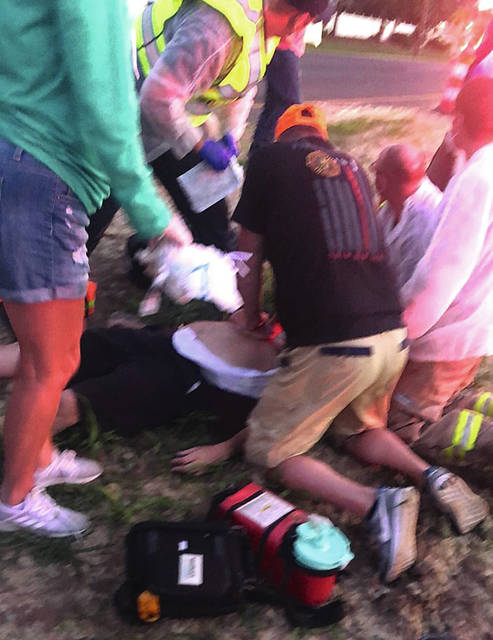 VERONA — It was not the typical Myrtle Beach vacation that Verona Fire Captain Rob Rayburg and his wife Beth had planned.

But, John and Tina Davis of Orangeburg, South Carolina, will have the opportunity to celebrate a 33rd anniversary next June because of their actions.

It all happened on June 18, when the Rayburgs were on their annual vacation to Myrtle Beach.

“We were in Myrtle Beach with about 28 or 29 of my wife’s relatives,” Rob Rayburg said. “It is something we do every June. We were taking our daughter’s boyfriend back to the airport because he had to leave early.”

They were traveling down Business 17 when they noticed a car pulled over in the median.

“It is a fairly busy highway,” Rob Rayburg said. “When I saw the car, I said something is up, we need to go check this out. I am a mechanic, and Beth (Rayburg) said, even if it is just a mechanical problem with the car, you can help them out.”

Things changed in a hurry when they pulled up in the median near the car. Almost before Rob Rayburg could put his four-ways (hazard lights) on, a woman came running up from the car.

“Immediately, a woman (Tina Davis) came running up from the car, saying there was something wrong with her husband and she needed help,” Beth Rayburg said.

They found John Davis slumped over the driver’s seat.

“He had no pulse and he was not breathing,” Rob Rayburg said. “I keep a first responders bag in both our vehicles. So, I went and got the bag. I was doing compressions, while Beth was breathing for him.”

Beth said other cars began to stop and see if they could help.

“And every car was from Ohio that stopped,” Beth said. “I am proud of Ohioans. And the great thing about it was, it was just a bunch of people coming together trying to help. Some were black, some were white, color didn’t matter.”

”It was just people coming together to help someone,” he said. “And that is what we need more of.”

They continued to work on him.

“Rob (Rayburg) was doing compressions and he just kept telling me when to breathe,” Beth said. “I was doing the breathing for him.”

Then, first responders began to arrive.

“The ladder truck was the first to arrive,” Rob Rayburg said. “They went and got the oxygen mask.”

They continued to work feverishly on him, shocking him back and eventually getting a faint heart beat.

“To me, Tina (Davis) is the real hero,” Beth Rayburg said. “First, when he slumped over, the car was moving and she had to reach over and steer the car and get the car stopped. She was not going to stop until she got help.

“I believe she would have ran out onto the middle of the highway if she had to. She was praying the whole time saying, you have to save him, I need him.”

“They were about one block from a major intersection,” he said. “If she hadn’t been able to control the car and get it stopped, there would have been a major crash with multiple cars.”

“The car has a lot of safety features on it,” Tina Davis said. “I just needed to steer it over into the median, which was sand and was able to get it stopped.”

And never had she been so happy to see someone stop when the Rayburgs pulled up.

“God was definitely with us that day,” she said. “I think the world of them (the Rayburgs). If they hadn’t stopped, John (Davis) wouldn’t be here today.”

At the same time as they worked on John Davis, they were trying to calm Tina Davis.

“It was their 32nd wedding anniversary,” Beth Rayburg said. “They were from about three hours away from Myrtle Beach. They had two grandkids in the backseat and they had nobody else there. So, when all this was going on we were trying to calm her down and my daughter was with her grandkids, telling them everything was going to be alright.”

A celebration had been planned for the next day.

“Our children and the rest of our grandchildren were coming up on Friday (June 19),” Tina Davis said. “Two of our granddaughters came up early and we had them with us.”

Eventually, the decision was made they needed to transport him.

“Tina (Davis) decided they would take him to the nearest hospital,” Rob Rayburg said. “There was no way she could drive. So, I told her to ride with me and Beth would follow us.”

On the way to hospital, Rob Rayburg saw a first responder vehicle pulled over and was concerned John Davis’ heart may have stopped again.

“I know the only time they pull over is usually to shock some one,” he said. “But, it turned out there was another accident.”

Once, they got to the hospital and Tina Davis needed to see the doctors, the Rayburgs said they would watch her grandkids.

“She said, ‘No, you are going with me to talk to the doctors,’” Beth Rayburg said. “So, my daughter watched the grandkids.”

Eventually, he was stable enough to be transported to North Strand Hospital, which had an ICU unit.

“On the way there, he pulled out his breathing tube, sat up and wanted to know where his wife was and what happened,” Rayburg said. “It is just a miracle he didn’t have any brain damage or anything.”

When they went to put in a stint, they couldn’t find any blockages.

“They put a defibrillator and pacemaker in,” Rob Rayburg said.

His oxygen level was at 20 percent and needed to get to 60 percent.

“On the following Tuesday, he got to come home,” Rob Rayburg said. “We have been in contact with them every since.”

It is not the first time, the Rayburgs have had to try and revive someone.

“It is the first time with this outcome,” Rob Rayburg said. “Because of the HIPAA laws, you usually don’t find out the end result. This is the first time it has happened where the person survived. And they told us if we had not done what we did before the paramedics got there, he might not have survived.”

The Davis can’t wait to see the Rayburgs again.

“I told them, just get healthy,” Rob Rayburg said. “We don’t care if it is months — or a year. Getting healthy is all that matters. We look forward to seeing them next June and helping them celebrate their 33rd anniversary.”

Tina and John Davis are hoping it will be very different than their 32nd anniversary.

“I hope it is nothing like our 32nd,” Tina Davis said with a laugh. “The Rayburgs have already told me they will be coming down next year at the same time, so I am sure we will meet up with them.”

And celebrate the opportunity to celebrate a 33rd anniversary.

“It makes you appreciate everything,” Tina Davis said about going through something like that. “And I appreciate the Rayburgs. If it wasn’t for them, John (Davis) wouldn’t be here.”

There truly is much to celebrate. 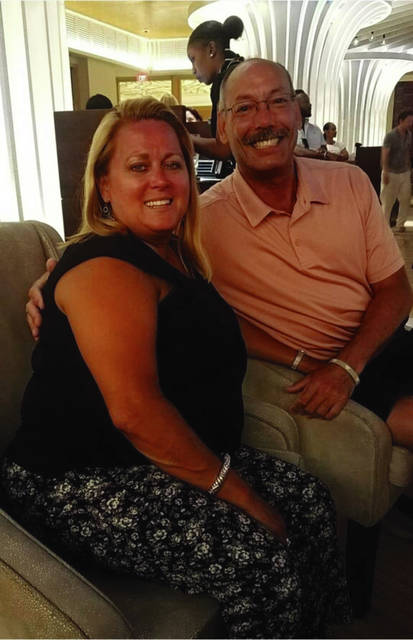 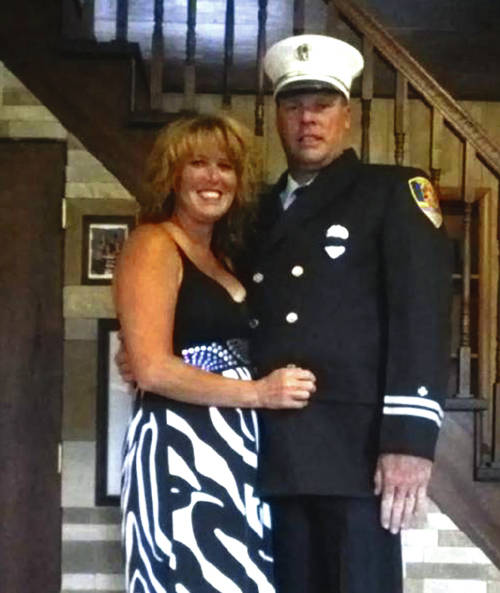