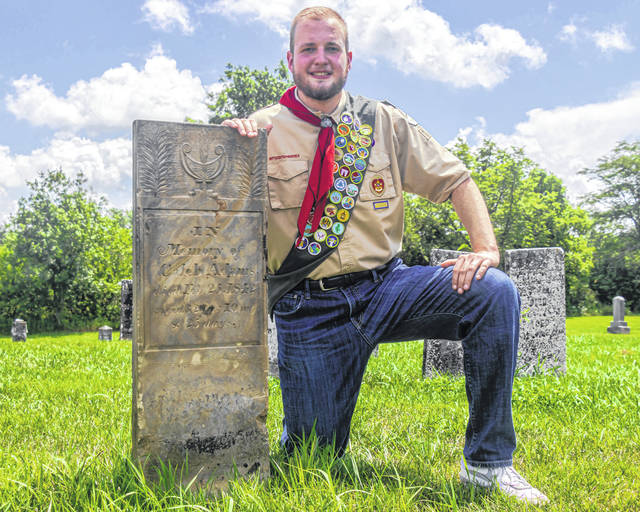 GREENVILLE — Despite the ongoing COVID-19 pandemic and other issues facing our nation, a Greenville High School graduate has achieved a landmark year to remember.

On February 27, Mason Wykes, of Greenville’s Boy Scout Troop 134, was awarded the title of Eagle Scout — the highest rank in scouting by the Boy Scouts of America.

To earn the Eagle Scout rank, a scout must earn the ranks of Scout, Tenderfoot, Second class, First class, Star, and Life. The scout must also complete at least 21 merit badges of which 13 must be Eagle-required Merit Badges such as First Aid, Swimming, Citizenship in Community, and Nation and World. The final major requirement to become an Eagle Scout is the scout’s Eagle Project. After the Eagle Scout Project is complete, the scout has an Eagle Scout Board of review, where the board will review everything the scout has done for his community throughout his scouting career.

Mason’s Eagle Scout project consisted of doing repairs to headstones at Greenville Township’s Martin Cemetery. Many of the headstones are close to or more than 100 years old. Some date as far back as the Revolutionary War period. Many consist of a single slate of stone, and over time these types of headstones have become crooked or started leaning due to the trials of time and weather. The purpose of the project was to restore those headstones and provide them with a stable foundation to endure over time.

“I began thinking of the project as I drove by and noticed the dire shape of the cemetery,” said Wykes. “I chose the project and contacted the township for consideration and approval of the project.”

After nearly five months of research, planning and endless phone calls, Wykes was able to gather as much backing as possible and move forward with his project. A total of 15 adults and scouts from Troop 134 helped in completing the project which consisted of the restoration of 52 headstones in a single day.

The cost of the project was made possible by funds provided by Abbottsville Monuments, Zechar Bailey Funeral Home, Jim Gable State Farm, and donations of materials by Lowe’s Home Improvement. Nickol Monuments provided valuable insight into how to repair the headstones.

“I can’t give everyone enough credit for the donations or enough thanks to all those who came out to help with the project,” Wykes said. “Of all the memories I have of being a scout, this project by far is the most memorable over the years because of them.”

Wykes, a 2020 graduate of Greenville High School, is the son of Steve and Janalyn Wykes. Mason credits his parents as being a driving force behind his success as a scout and in his academic and athletic achievements as a member of The National Honor Society and a varsity basketball player. In addition to Eagle Scout Rank, Mason was awarded a Bronze and Gold Palm for his Eagle Scout Medal for completing 10 additional Merit Badges beyond what is required for Eagle Scout.

Wykes’ Court of Honor ceremony will be held as soon the current COVID-19 pandemic allows.